Where the Fire Falls By Karen Barnett GIVEAWAY! 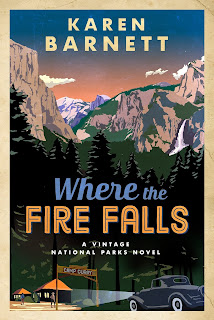 Stunning Yosemite National Park sets the stage for this late 1920s historical romance with mystery, adventure, heart, and a sense of the place John Muir described as "pervaded with divine light."Watercolorist Olivia Rutherford has shed her humble beginnings to fashion her image as an avant-garde artist to appeal to the region's wealthy art-collectors. When she lands a lucrative contract painting illustrations of Yosemite National Park for a travel magazine, including its nightly one-of-a-kind Firefall event, she hopes the money will lift Olivia and her sisters out of poverty.

After false accusations cost him everything, former minister Clark Johnson has found purpose as a backcountry guide in this natural cathedral of granite and trees. Now he's faced with the opportunity to become a National Parks Ranger, but is it his true calling?

As Clark opens Olivia's eyes to the wonders of Yosemite, she discovers the people are as vital to the park's story as its vistas--a revelation that may bring her charade to an end. 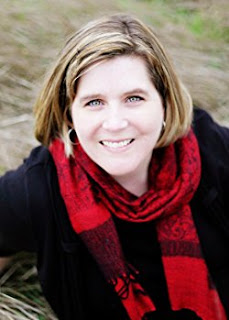 Karen Barnett is the award-winning author of The Golden Gate Chronicles (Out of the Ruins, Beyond the Ashes, and Through the Shadows) and Mistaken. She lives in the Pacific Northwest with her husband, two kids, and three mischievous dachshunds. When she's not writing, Karen enjoys photography, hiking, public speaking, decorating crazy birthday cakes, and dragging her family through dusty history museums. Oregon Christian Writers (OCW) honored her with the Writer of Promise Award in 2013 and a Cascade Award for her debut novel, Mistaken, in 2014. In 2016, she was named Writer of the Year by the prestigious Mount Hermon Christian Writers Conference. Karen is a member of American Christian Fiction Writers (ACFW) and Oregon Christian Writers (OCW) and has been published in Guideposts and other national magazines.

Post by AJ
Posted by Mary Jackson at 9:18 AM