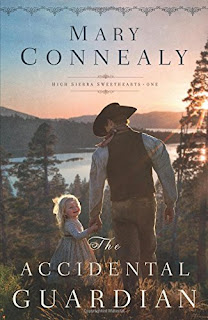 When Trace Riley finds the smoldering ruins of a small wagon train, he recognizes the hand behind the attack as the same group who left him as sole survivor years ago. Living off the wilderness since then, he'd finally carved out a home and started a herd--while serving as a self-appointed guardian of the trail, driving off dangerous men. He'd
hoped those days were over, but the latest attack shows he was wrong.

Deborah Harkness saved her younger sister and two toddlers during the attack, and now finds herself at the mercy of her rescuer. Trace offers the only shelter for miles around, and agrees to take them in until she can safely continue. His simple bachelor existence never anticipated kids and women in the picture and their arrival is unsettling--yet enticing.

Working to survive the winter and finally bring justice to the trail, Trace and Deborah find themselves drawn together--yet every day approaches the moment she'll leave forever.

Mary Connealy writes romantic comedy...with cowboys.
http://www.maryconnealy.com
She is a Carol Award winner, and a Rita, Christy and Inspirational Reader's Choice finalist.
She is the author of bestselling Kincaid Brides Series, Trouble in Texas Series, Wild at Heart Series, and Cimarron Legacy Series. Her work also includes Lassoed in Texas Trilogy, Montana Marriages Trilogy and Sophie's Daughters Trilogy. And several novella collections including; Calico & Cowboy Romance Collection, Hearts Entwined, A Bride for All Seasons, Four Weddings and a Kiss, A Match Made in Texas and many more books.

Mary is married to her very own romantic cowboy hero and has four grown daughters and a small bevy of spectacular grandchildren.


After our daughter passed away two people sent copies of this book to Mary. I hope that you will read it and share this post with your friends.
Post by AJ
Posted by Mary Jackson at 9:55 AM