The Splendor of Ordinary Days By Jeff High 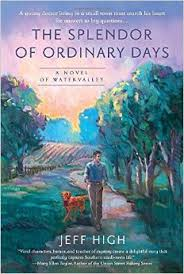 Readers of Jan Karon’s Mitford series and Patrick Taylor’s Irish Country series will fall in love with Jeff High’s funny, heartfelt Watervalley series.The pastoral charm of small-town Watervalley, Tennesse, can be deceptive, as young Dr. Luke Bradford discovers when he’s caught in the fallout of a decades-old conflict…After a rocky start as Watervalley’s only doctor, Luke Bradford has decided to stay in town, honoring the three-year commitment he made to pay off his medical school debts. But even as his friendships with the quirky townsfolk deepen, and he pursues a romance with lovely schoolteacher Christine Chambers, several military veterans’ emotional wounds trigger anger and unrest in Watervalley.At the center of the clash is the curmudgeonly publisher of the local newspaper, Luther Whitmore. Luther grew up in Watervalley, but he returned from combat in Vietnam a changed man. He fenced in beautiful Moon Lake, posting “Keep Out” notices at the beloved spot, and provokes the townspeople with his incendiary newspaper.   As Luke struggles to understand Luther’s past, and restore harmony in Watervalley, an unforeseen crisis shatters a relationship he values dearly. Suddenly Luke must answer life’s toughest questions about service, courage, love, and sacrifice.

After growing up in rural Tennessee, Jeff High attained degrees in literature and nursing. He is a three time winner, in poetry and fiction, of an annual writing contest held by Vanderbilt Medical Center. He lived in Nashville for many years, and throughout the country as a travel nurse, before returning to his original hometown, near where he now works as an operating room RN in cardiac surgery.

This is book three in the Watervalley Series.
Keep in mind when reading my review, I thought it was a Christian book because the tour was done thru a media outlet that usually does only Christian books. So I was very surprised by the content of this book.
The book has a very slow start. There were more than a few chapters before a plot was clearly developed. I had trouble getting into the book at first. There was also more than a few words in this book that I think should never be in a christian book. The author also wrote about alcohol consumption a few times. With that said the character development was very good. I think everyone has people in there life similar to each character that was in this story. I also like the fact that the book takes place in Mennonite country.
I give this book 3 stars.
I was given a copy of this book by the publisher for my honest review.