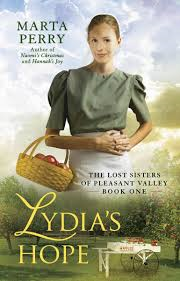 Three Amish sisters, separated when very young, know nothing about one another—until a long-held secret is revealed.
With no memory of her birth parents, or the tragic accident that took their lives, Lydia Beachy has always been grateful for the aunt and uncle who took her in and raised her as their own. Now a married woman with two sons, Lydia finds her life turned upside down when she discovers that she has two younger sisters: Susanna, who was adopted by an Amish family in another community, and Chloe, who was raised by their grandmother among the Englisch.

Angry and confused, Lydia first seeks out Susanna but stops short of telling her the truth. To track down Chloe, she enlists the help of a neighbor who has spent some years in the Englisch world. Meanwhile, Lydia’s husband, Adam, is keeping a secret of his own. Lydia yearns to be united with the sisters she has never known, but will revealing herself to them tear their lives apart…or enrich them beyond all imagining?
Get your copy here
http://www.amazon.com/Lydias-Hope-Sisters-Pleasant-Valley/dp/0425253562/ref=sr_1_1?s=books&ie=UTF8&qid=1376322961&sr=1-1&keywords=lydia%27s+hope

I realized I wanted to be a writer at age eight, when I read my first Nancy Drew novel, The Secret of the Old Clock. Most little girl reach the end of that book wanting to be Nancy. I wanted to be the person who created the story!
The dream lay hidden for years while I became a teacher, married, had children...all the usual things. But eventually it re-surfaced, and I began to write, beginning with short children's stories for Sunday school take-home papers. It seemed a long time until that first acceptance, but eventually I began to sell. After some three hundred published short stories, I finally found the courage to work on the novel I'd always wanted to write.
Thirty-some published novels later, I still feel the same excitement every time I begin a new book--a mix of not believing I can do it combined with an overwhelming urge to see the story on the page.
A lifetime spent in rural Pennsylvania and my own Pennsylvania Dutch roots eventually led me to the books I'm writing now about the Amish. The Pleasant Valley Amish series from Berkley Books are longer, more complex emotional stories with Amish main characters, while my forthcoming HQN suspense novels are more adventure-filled books set in Pennsylvania Dutch country. I'm also writing a Love Inspired series, The Bodine Family, set on the South Carolina coast where we have a second home.
When I'm not writing, I'm busy with church activities, traveling, and spending time with my three children and six beautiful grandchildren.
Posted by Mary Jackson at 12:01 PM