Promise Me The Moon By Nichole Evans 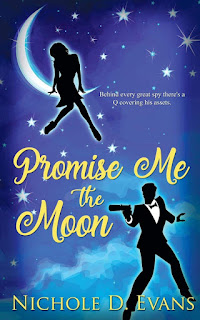 When Grace Quincy ("Q") lands a job as the lead scientist and engineer in the CIA's Clandestine Operations and Properties group, she becomes the Quartermaster for U.S. reconnaissance—the creator of spy gadgets for Jayce Jackson, special agent with a license to kill. As charming as the famed British double-O, Jackson is one-hundred percent all-American, from his dusty cowboy boots to his unending Southern charm. His conquests in and out of the bedroom are the stuff of legends, yet Q daydreams of being something more to Jackson. At the highly sought-after event, Nebulas and Novas, Q gets tangled in Jackson's latest mission and the mysterious disappearance of NASA's green glass Moon stone. Q must trust her wits to survive the dangerous operation, thwart Dr. Faust's sinister plan, and save the sexy spy she loves. 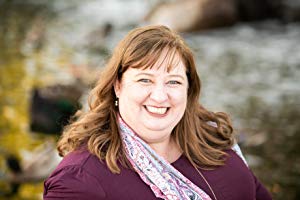 She believes in heroes and heroines who are smart, loyal, and do the right thing, even when the mission seems impossible. Inspired by the clever quips of James Bond and the unexpected courage of Jack Ryan, her plots are woven on a backdrop of real-world events, resolved just in time to fall in love.

Nichole is married to her real-life “Q”, and she has two children who are out saving the world on their own.

Oh How I hate writing this review.
As most of you know I am not a fan of self published books because 90% of the books have not been edited by professionals.
This was not my kind of read and I read a lot of books. It was all over the place and their was no editor in sight of this book.
I struggled with reading it and it is not one that I recommend.
It was at best a 2 star book.
The Mary Reader received this book from the publisher for review. A favorable review was not required and all views expressed are our own.
Posted by Mary Jackson at 6:28 AM

Email ThisBlogThis!Share to TwitterShare to FacebookShare to Pinterest
Labels: Nichole Evans, self published