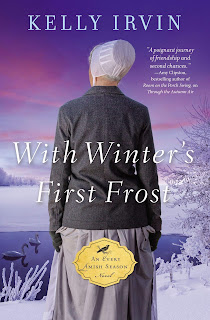 With the coldest season comes the warmest of second chances.
At age seventy-three, Laura Kauffman knows she is closer to the end of life than the beginning. If God willed it, she would join her beloved late husband soon. Even so, Laura wonders what purpose God might have for her in this winter of her life—and why this season seems so lonely.
Widower Zechariah Stutzman is facing his own barren season, despite the great-grandchildren swirling around him. With his Parkinson’s worsening, he had no choice but to move in with his grandson’s family, though now he feels adrift and useless.
When Laura offers to help with Zechariah’s five great-grandchildren after their mother has a difficult childbirth, Zechariah is unsure how he will adjust to the warm but tart demeanor of this woman he has known since grade school. But soon Laura and Zechariah learn they are asking God the same questions about loss and hope. And they begin to wonder if He is providing answers after all.
With Winter’s First Frost reminds us that God’s purposes always bear fruit—and sometimes love is sweeter with age.

Best-selling novelist Kelly Irvin's latest book is Beneath the Summer Sun, the second book in her Amish romance series, Every Amish Season, from Zondervan/HarperCollins Christian Publishing. This four-book series delves into the lives of four Amish women linked by life altering experiences that bring them together as wives, mothers, and grandmothers in the small town of Jamesport, Mo. The first book, Upon a Spring Breeze, received critical acclaim from the Library Journal: "A moving and compelling tale about the power of grace and forgiveness that reminds us how we become strongest in our most broken moments."

Kelly Irvin is also the author of The Amish of Bee County series, which includes the critically acclaimed The Beekeeper's Son. Publishers Weekly called the first book in the series a beautifully woven masterpiece and Romantic Times Magazine called Kelly a storyteller extraordinaire. It was followed by The Bishop's Son and The Saddle Maker's Son, which is an ECPA bestseller.

A two-time ACFW Carol finalist, Kelly's novellas have been included in numerous anthologies, including An Amish Summer, The Amish Christmas Gift, An Amish Market, an Amish Christmas Love, and Amish Quilt.

She also penned the Bliss Creek Amish series and the New Hope Amish series, both published by Harvest House Publishers. Love Still Stands, the first book in the New Hope series, debuted in September 2014, and the follow-up, Love Redeemed, released March 1, 2014. The final book in the series, set in Branson, MO., was A Plain Love Song, released in July 2014.

The Bliss Creek Amish series, set in Kansas, includes To Love and to Cherish, A Heart Made New, and Love's Journey Home.

In the New Hope series, familiar characters from Bliss Creek move to Missouri to start a new district and a new life.

A graduate of the University of Kansas William Allen White School of Journalism, Kelly wrote nonfiction professionally for thirty years. She studied for three semesters at the University of Costa Rica, learning the Spanish language. As a journalist, she worked six years in the border towns of Laredo and El Paso, where she was exposed to culture and language that serves as fodder for her fiction writing. She has written hard news, features, entertainment pieces, restaurant critiques, editorials, and weekly columns. Writing awards include the Silver Star Award from the Texas Mental Health Association for articles pertaining to mental health and numerous awards in news, feature, and editorial writing from the Texas Press Association and Texas Press Women.

Kelly retired in 2016 from her position of 22 years as public relations manager for the San Antonio Parks and Recreation Department, where her duties included writing and designing an employee newsletter, writing news releases, collaborating on marketing campaigns, coordinating ribbon-cuttings and groundbreakings, coordinating press conferences, updating the web site, and acting as a media spokesperson.

Kelly has been married to photographer Tim Irvin for more than 30 years, and they have two young adult children and two grandchildren. In her spare time, she likes to write short stories, read books by her favorite authors, and visit the babies.

I have read this whole series and enjoyed them all. I'm in awe of the covers to. Get ready to cozy up during this cold season and read this warm story of second chances. You are never to old for love. This Amish story is going to make you fall in love with the characters and be left wanting more.
The Mary Reader received this book from the publisher for review. A favorable review was not required and all views expressed are our own.
Posted by Mary Jackson at 6:21 AM

Email ThisBlogThis!Share to TwitterShare to FacebookShare to Pinterest
Labels: An Every Amish Season, Kelly Irvin