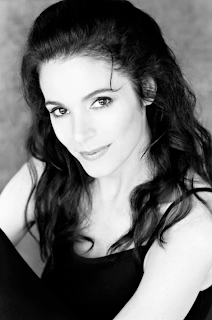 Tell us how much of yourself you write into your characters.
It depends on the character. In my first novel, the heroine was TOTALLY me circa college days—journalism student, mediocre print model, frizzy hair, God-lovin’ & raised in the country—a good first novel character to cut my teeth on. All my characters, though, have something of me in them just because I need to understand their motivation to write them well. Did I mention that Lucifer is one of the main characters in THE FALL??

What is the quirkiest thing you have ever done?
When my husband and I first started dating, we were so bratty and had so much pent-up emotion (we had been great friends for a year and a half) we ended up spending one entire night in a continuous pillow-fight. My roommate the next day said every now and then during the night she would wake up and hear this mysterious “poof-poof” and laughter.

When did you first discover that you were a writer?
I have always enjoyed expressing myself through the written word and even majored in broadcast journalism in college. However, the passion/addiction/first-love-giddiness of getting lost in writing a novel happened six years ago as I worked on my first, Rock Star. I was getting maybe three to four hours of sleep a night and feeling fantastic. It really was a bit like falling into first love.

Tell us the range of the kinds of books you enjoy reading.
I have a large range—classic Jane Austen to modern sci-fi—but I don’t enjoy anything gratuitous as far as sex, language, or violence. If the characters are interesting, there’s a worthwhile, page-turning story, a bit of a love interest, and so on I can get hooked. Shoot, if a cookbook is well-written and the author is passionate about their craft it’s a nice escape.

How do you keep your sanity in our run, run, run world?
Is that a requirement? Seriously, writing helps me maintain sanity. It makes my jumbled thoughts come out in single-file and the creative process is very cathartic—take a trip and never leave the farm!

How do you choose your characters’ names?
Interesting question. Every character’s name—at least so far—has just seemed to drop into my head. Actually, I found it much easier than naming our children, perhaps because so much of the time I almost feel that I’m taking dictation. I pray hard then go write.

What is the accomplishment that you are most proud of?
I find the publishing of my first novel to be the most unbelievable, but the accomplishment I’m most proud of would be my marriage of twenty-two years. He’s still my best friend, the person I enjoy the most, and we’re still crazy about each other. I longed for and dreamed of a great marriage but really had a hard time believing it was possible.

If you were an animal, which one would you be, and why?
My kids and I like to discuss this one rather often. I usually settle on a Bald Eagle since I think they’re such regal creatures and the idea of soaring high above The Grand Canyon or something sounds amazing—not to mention eagles are rather high in the food chain.

What is your favorite food?
If I talk about it, I’m going to want to go bake: Hot, homemade chocolate chip cookies with cold milk for dipping. There’s gotta be chocolate in heaven, I just know it! And for a chaser—tons of TexMex straight from the Riverwalk of San Antonio, TX!

What is the problem with writing that was your greatest roadblock, and how did you overcome it?
The hardest thing about writing has been unplugging from a crazy, creative session in order to do everyday tasks like fix breakfast and homeschool my kids. It’s not that I don’t love those activities, it’s just so hard to stop when I’m on a roll! The only way to overcome that problem was to embrace sleep-deprivation, get up early, pray, then head to my favorite Starbucks that opens most days at 5 a.m.

Tell us about the featured book.
THE FALL (Rapha Chronicles, Book 1) is a biblical retelling of ancient times through the eyes of an angel who was once best friends with Lucifer. The story follows Rapha, a faithful angel, as he witnesses Lucifer’s rebellion and the resulting cataclysm in heaven that continues through the Garden of Eden and beyond.  THE FALL is beyond epic and, when the ideas first started coming, the task scared me to death. But, spoonful by daily spoonful, we moved that mountain...  well, the first mountain in the publishing mountain range anyway.  I’m projecting at least three more installments for the Rapha series. He has a huge story to tell considering he knew Lucifer “back when” and gets to see the entire span of the age of men from beginning to end.  One of the most beautiful things about this novel is when an avowed atheist, agnostic or someone who is just angry at religion tells me they felt close to God and encouraged on a deep level even though the subject matter is harsh.  My favorite description from one reviewer stated, “It’s Harry Potter meets the Common Book of Prayer.” 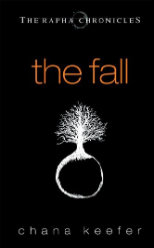 Here’s a snippet from Chapter One "End of an Age":

There was a time they were best friends… a distant memory almost forgotten.  Almost.
It would be so much easier if he could forget.
Peace, peace, but there is no peace… Rapha clutches his head in his hands oblivious to the rare trace of fresh air and woodland noises around him, too lost in fractured, tortured memories.
A child’s eyes, wide with fear; a woman’s ripe belly, torn; screams and cries of anguish splitting the darkness of night; innocence lost; purity destroyed; life swallowed in death.  And weaving through every image, the sound of cruel laughter—feasting on mankind’s pain.
That face.  Rapha squeezes his head but the image burns clearer—a face bathed in shadows as fumes of death cast waves of beauty and horror—eyes of leeching evil.  Those eyes suck him into darkness, willing him to join the nightmare.
With all the force of his formidable will Rapha wrenches his thoughts from that realm, forcing his eyes open to light and life.  A flower—tiny, bright, thriving no more than a few brave hours—faces the sun’s feeble light.  With a need for comfort, Rapha stretches face down, breathing in soil and weakly pulsing life.  Although fires burn, smokes of destruction rise and death reigns, but here is a patch of green.  His fingers grip deep into soft earth as fresh pain rips through him.
Flashing, intelligent eyes; a carefree smile; beautiful hands gesturing with enthusiasm; boyish laughter filtering through a forest glade—ancient memories that bring unbearable torture.
Sobs rumble from the depths of the earth itself, erupting through Rapha’s muscular frame.
“I cannot,” he gasps, wrestling in his mind with an unseen companion. “It’s impossible.  He’s gone too far for too long.  There’s nothing, nothing pure—he’s made it so….” Rapha’s body writhes like a tortured serpent, with agony greater than he’s ever experienced, threatening to rip his immortal soul from his impervious body.
But wait.  There was a time he tasted deeper anguish.
No.  Please.  That is locked away—eternal sanity demanded it.  But the horrific images descend once again.
The loved one weeps in agony, precious flesh is torn over and over as Rapha’s heart feels every rip of the whip, every trickle of spittle, every curse thrown like a poisoned spear.  And there, in the crazed mob, everywhere he looks, the twisted, beautiful, triumphant, mocking face of one who was once a brother
Rapha’s earth-crusted hands clutch at his ears but the laughter grows, filling every recess of his soul, stealing every hope and joyful memory.
A joyful memory?
In a flash Rapha is there; catapulted through eons of space and time, before the purity of the garden, back through countless ages to a fresh hilltop lit by a younger, more optimistic sun.  He and Luc preferred the plunging cliffs dropping to unseen depths below.  Somehow, a spiral dive carried more of a thrill when performed in a temporal world.
“There’s something about this place,” Luc’s eyes flitted from tree to mountain and stream as he stretched golden arms wide as if to embrace the early morning’s glow filtering through droplets of mist.  “It’s not as grand as our flawless, hallowed domain but the appeal is undeniable.”
Rapha had ignored the note of restlessness in that melodic voice, choosing to enjoy fresh air laced with flowered perfume and the spiced musk of fertile soil.  In the countless years of their friendship, he had learned Luc’s passions could flash with the slightest provocation, but usually, if Rapha allowed Luc to give vent to his emotions, the darker frame of mind would pass.  And, a visit to this, their favorite retreat, was usually the perfect remedy, a change of pace and a different rhythm that put celestial matters into perspective.  With a sigh Rapha settled back into thick green with one arm behind his head to contemplate the crisp blue above.  Yes.  This was just what Luc needed, a deep breath of contentment.
Website: www.chanakeefer.com
Follow me on Twitter @chanakeefer
Facebook: The Rapha Chronicles

Email ThisBlogThis!Share to TwitterShare to FacebookShare to Pinterest
Labels: Chana Keefer, The Fall