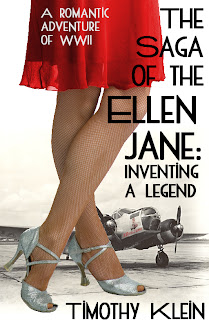 What sparked your decision to start writing?
About two years ago, I was skimming the romance novel that my wife was reading and observed, "I can write better junk than this."  She told me to go ahead and do it. So I did.  I found that it was remarkably therapeutic.  I started in Sept of 2010 and soon realized that the story was going to be at least three volumes long.  I was also told that Volume I had to be under the tree on Christmas Eve.  It just barely made it.

This wasn't completely out of character for me. My mother and grandmother were both English teachers, and so are both sisters.  I had written several short stories while in high school and was "published" in a ScFi "fanzine" back in the '70s.  (I think it had around 400 Trekie subscribers.) I also started on some non-fiction several years ago.  I had been too busy to really think about writing until my wife dared me.

My office, where I wrote the book, is actually in an aircraft hangar. Hence, airplanes were going to play a major role in the story line. However, most aviation literature is ALL about airplanes. I wanted to come up with a story that both pilots and non-pilots would enjoy.

As a side note, we did a book signing at AirVenture in , , the largest air show in the .  Numerous guys bought the book as a gift for their wives.  I'm curious as to how that worked out for them.  Let's see, he spent a week goofing off with his buddies at an air show, while she was at home with the kids and all he brought her was a book from some author she'd never heard of.  Yeah, that will work.

How does faith play into yur writing?
Faith?  It doesn't, I just figured adding some religion would help sell more books (just kidding!)

Frankly, I didn't intend to write a "Christian" book and many would not consider The Saga of the Ellen Jane to fit that genre. But as the story developed, I found that I couldn't keep faith out of it.  My goal is to encourage believers and get the non-believers to ask questions.  Who knows, maybe the story could be used as a conversation starter?  Or maybe I'll be burned as a heretic?

Be warned! The "Christian" characters in my stories do not behave perfectly.  Then again, with one major exception, everyone in the Bible is behaving badly.

I wanted a realistic story, with real characters, not the "sugar lumps covered in honey" gooey sweetness that some Christian novels are known for.  Quite frankly, it turns off a lot of non-believers. The biggest challenge was to avoid sounding "preachy".  Several readers, (non-believers, I believe), have commented that the dialog fits the characters.  By having a missionary and a preacher in the story, I could introduce conversations that "normal" characters couldn't get away with.

I have seven guidelines for writing:

1.    Don't write anything that would upset God the Father. (That's a good rule for anything you're doing.)
2.    Write about what you find interesting and enjoyable.  For me that's airplanes, adventure, war, babes, firearms, Nazis etc.  Notice that I didn't say "write what you know"; you'll learn what you need to know along the way.  (I knew very little about before starting this book.)
3.      It has to be plausible. On a "believability" scale of 1 to 100, with James Bond at 007; I want my stories to rank at least a 70.
4.     Have a positive message. The world has enough stories about vampires, cheap sex and vampires having cheap sex.
5.      Define your audience and then keep them happy! For me, the "audience" consists of one woman, my wife.
6.    Don't follow a boilerplate! I could write a computer program to crank out romances using the standard formulas. You know: girl meets a boy she hates but has to marry because her dad owes his dad money and he drags her off and they kiss once and then she's kidnapped but realizes that she loves him and he rescues her while wearing just a kilt and they discover she's pregnant.  (That sentence didn't deserve any commas.)
7.      There are no rules. Well, there are rules but most people agree that they're now meaningless.  If you doubt that, go read The Sound and the Fury or some of David Foster Wallace.  I agree that you need correct spelling, verb tense and grammar but everything else is negotiable. Well, everything except semicolons; my editors don't like semicolons; but I do; they make me take them out; I guess I have a fetish.
Why did you choose this genre?


I didn't really chose this genre; it just happened. I knew it had to have romance (that's what my wife wanted) and I wanted enough action/adventure for the guys. The theology just started sneaking out.

What is your favorite Bible verse?


I tell my kids that it's Phil. 4.4-9 which is a great set of verses for anyone. Especially for those of us that used to be world class worriers; however, I tell my wife that it's Proverbs 5.19.  If more men followed this proverb, the world would be a better place.

What are you writing now?
I am supposed to be re-editing Volume II of the Saga. I gave my wife the unedited draft last Christmas. We want to publish it by Thanksgiving and need to get a polished copy to our editors; however, the CEO of Stearman Press has informed me that Volume III must be under the tree by Christmas of this year.

Unfortunately, I've gotten re-interested in the sci-fi series that I started years ago and have been playing with that when she isn't looking.

If you could go on a trip anywhere in the world where would you go?
When we got married, I promised my wife a trip to Hawaii for our 10th anniversary and now our 19th is fast approaching; however, I'd rather go to Brazil and see the locale where the story takes place and do more research. She'd probably accept that in lieu of as long as there's a warm beach and the kids stay home. Which, at the rate we're going, they'll soon be old enough to do!


This might be a touchy subject and I hope you're not too disappointed but we're cat people.  This has more to do with necessary than a love of animals. We live next to acres of open space, which means we are in a constant war with mice.  We tried all the other traps and found that the "live" traps work best.

Let me expand. At one point we had two rabbits and two cats. The rabbits were lots of work, had very expensive upkeep, rather smelly and actually not very cuddly.  They could scratch you worse than the cats. In fact, they chased the cats; very embarrassing.  One rabbit got sick and died.

So I made a deal with our youngest daughter. If she'd give her rabbit to our neighbors, who already had five rabbits and, for reasons beyond my comprehension, wanted another, she could get a kitten.  She was as sick of the rabbits as her parents were.  So we went to a friend's farm to get a kitten and came back with the kitten, the kitten's sister and a horse.  Luckily, we soon discovered that the kitten was a he and so was her brother.  (You'd think a farm woman would know the difference.)  We now have four cats and a lease on a horse (but thankfully, no rabbits and very few mice).

What is your favorite comfort food?


(Note to Mary: guys don't do comfort food, or at least they don't admit to it.)

My first job was as a pizza chef and I've been a connoisseur of fine pizza ever since. I've had pizza from to to to , to Tel Aviv, .  One of my favorite combos is ham, pineapple and sauerkraut.  It shows up numerous times in the book and don't knock it until you've tried it.  It has kind of a sweet and sour thing going.  But when it comes time to order, ground beef/mushroom/extra sauce, is my all time favorite.  I even have two pizza stones and a peel for when I can't get to a pizzeria.

What movie has inspired you the most?


I’m not a big movie guy.  Even though our prenuptial agreement requires that I take her to two movies a year, she hasn't enforced that provision since we've subscribed to Netflix.  I guess if I have to answer, I should go with something safe like Chariots of Fire which was a great movie. To be honest, the movie that might have influenced me the most was Necessary Roughness.  (Yeah, I know, all the guys list that one.) Seriously, it probably falls into the category of "unintended consequences"; it was the movie my wife and I saw on our first date.

Can you explain your choice of cover art?


Well, there's an airplane in the book, so we put an airplane on the cover.
I wasn't asking about the airplane ...

Oh, the legs. We did an extensive marketing survey and found that, apparently, the cover of a romance novel must have at least one of the following:

We went with the woman's legs since the heroine in the book is known for wearing a red skirt.

For the aviation buffs, is the Ellen Jane a real airplane?


Sort of.  At the beginning of WWII, the U.S. Army Air Corps needed an inexpensive bombardier/navigator trainer.  Beech Aircraft modified their Model 18 transport by adding the clear nose, bomb racks and a turret.  They built over 1500 of them, designated the AT-11 Kansan.  Ninety percent of all bombardiers trained in them, as did hundreds of thousands of machine gunners and navigators.

The AT-11 served in numerous air forces around the world, including the Brazilian.  Supposedly, the Chinese flew them as bombers in actual combat.

The characters in my story came up with the idea a few years earlier but never got credit for it (until now).

You can get autographed copies from our website: http://www.thesagaoftheellenjane.com/ 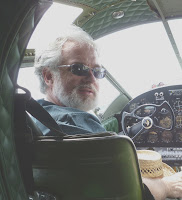