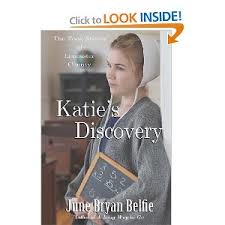 Katie Zook, the youngest of three sisters, does not seem like herself. What is causing the sweet, cheerful Amish beauty to be despondent? Is her weight loss intentional or the result of something more serious? Josiah Stoltz, a family friend, returns from the city where he's been earning money to buy his own farm. Katie finds herself enamored of the young farmer and hopes the feeling is mutual. Everything changes when a friend from his past places Josiah in danger. Katie, as well as her Amish community, find themselves in the midst of his problems. Will Josiah be shunned for his actions? Will it ruin Katie's hopes for a relationship with him?
Pick up your copy here
http://www.amazon.com/Katies-Discovery-Sisters-Lancaster-County/dp/148201694X/ref=sr_1_1_bnp_1_pap?ie=UTF8&qid=1385739715&sr=8-1&keywords=Katies+Discovery 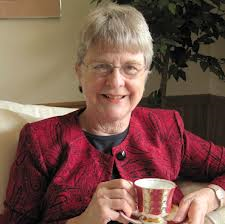 June Belfie is addicted to writing. Rarely does a day go by without Ms. Belfie spending time on her exciting new career.

A music major in school, she later turned to oil painting and sold many at her Inn in the Poconos, where she and her husband Jim spent eleven exciting years creating a get-away haven for weary New Yorkers and Philadelphians, as well as travelers from all walks of life. Ms. Belfie recently published her memoir about inn-keeping called, "Inn Sane," available now as an ebook or in paper.

"All About Grace" is a novel about a young law student who finds herself in turmoil over a major decision, which turns her life upside down. This is a Christian novel based on major social issues.

June Belfie's latest book is a continuation of the heartfelt Amish stories of Lancaster County. It is called, "Waiting for Belinda," Book One of "The Zooks Revisited." Belinda lives in Ohio, but due to her wayward behavior, ends up living with a family member in Pennsylvania. She is torn between the Amish lifestyle and that of her English friends.

Five e-book novels are available now through Desert Breeze Publishers. "A Long Way to Go" is a popular Christian novel about the 1843 expedition across the Oregon Trail. In October of 2013 it will become available in paper also. In February of 2014, two other titles will be published in paper as well. "Moving On," and "A Special Blessing for Sara."

"The Landlord" and "The Inn Game" are light romantic reads, available in ebook form.

Raising five children (all productive members of society - so far!) she's now enjoying the fruits of her labor - in the form of eight grandkids!

"God's been so good to me. I want to share His impact on my life with others. Every book has a message - some obvious - some more subtle."


June writes as if she herself is Amish. Her characters are so real and easy to relate to. This is one of the Amish fiction books that you just don't want to put down.
You will want to read this Series in order so that you can keep up with who everyone is. I recommend the whole series.
June knows her Amish history, it is not a bunch of unrealistic writing like a whole lot of the Amish fiction writers these days.
The Zook Sisters of Lancaster County is not a series to be missed.
I gave this book 5 stars. I recommend this book as well as the whole series.
I was given a copy of this book by the author for my honest review.