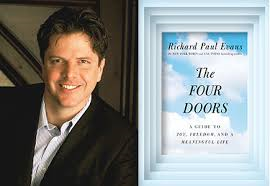 selling novelist Richard Paul Evans has met hundreds of thousands of people and heard many of their stories in his travels over the past two decades. Most of the people he meets are hungry for inspiration; they love his novels because his characters are also searching for meaning and understanding.

The Four Doors is Evans’s message to those who seek inspiration in their lives. It began as a talk he gave on the spur of the moment, and over the course of ten years, it has evolved into a message he has shared with successful business people, students, and even addicts and prisoners. It includes stories his readers have told him, stories about great achievers who overcame hardships, and stories about his own struggle growing up in a large family with financial difficulties and a suicidal mother, and about his diagnosis of Tourette’s Syndrome later in life. These inspiring stories are woven through his identification and careful explanation of the four doors to a more fulfilling life:

BELIEVE THERE’S A REASON YOU WERE BORN

FREE YOURSELF FROM LIMITATION

Evans believes that we all want to know the meaning of our lives. In The Four Doors, he shows how even the most quiet life can be full of purpose and joy, if we choose to take that first step over the threshold.

When Richard Paul Evans wrote the #1 best-seller, The Christmas Box, he never intended on becoming an internationally known author.

Officially, he was an advertising executive, an award-winning clay animator for the American and Japanese markets, candidate for state legislature and most importantly, husband and father. The Christmas Box was written as an expression of love for his (then) two daughters. Though he often told them how much he loved them, he wanted to express his love in a way that would be timeless. In 1993, Evans reproduced 20 copies of the final story and gave them to his closest relatives and friends as Christmas presents. In the month following, those 20 copies were passed around more than 160 times, and soon word spread so widely that bookstores began calling his home with orders for it.

His quiet story of parental love and the true meaning of Christmas made history when it became simultaneously the #1 hardcover and paperback book in the nation. Since then, more than eight million copies of The Christmas Box have been printed. The Emmy award-winning CBS television movie based on The Christmas Box starred Maureen O'Hara and Richard Thomas. Two more of Evans's books were produced by Hallmark and starred such well-known actors as James Earl Jones, Vanessa Redgrave, Naomi Watts, Mary McDonough and Academy award winner Ellen Burstyn. He has since written 10 consecutive New York Times bestsellers and is one of the few authors in history to have hit both the fiction and non-fiction bestseller lists. He has won three awards for his children's books including the 1998 American Mothers book award and two first place Storytelling World awards. Evans's latest book, The 5 Lessons a Millionaire Taught Me About Life and Wealth, is now available.

Of his success, Evans says: "The material achievements of The Christmas Box will never convey its true success, the lives it has changed, the families brought closer together, the mothers and fathers who suddenly understand the pricelessness of their children's fleeting childhood. I share the message of this book with you in hopes that in some way, you might be, as I was, enlightened."

During the Spring of 1997, Evans founded The Christmas Box House International, an organization devoted to building shelters and providing services for abused and neglected children. Such shelters are operational in Moab, Vernal, Ogden and Salt Lake City, Utah and Lucre, Peru. To date, more than 16,000 children have been housed in Christmas Box House facilities.


I have to say this book needs to be read by everyone.
I own and have read every book Richard has written, but this nonfiction book is one you that I call A MUST HAVE.
I true gift from Richard to all of his readers.
This book is a treasure you will cherish always.
I would recommend that you pick up an extra copy of this one as a gift to someone that you truly love.
I wish that I could buy a copy for all my faithful blog followers.
There are not enough stars for this book, 5 is just not enough and five stars two times is still not enough.
I HIGHLY recommend this book.
Posted by Mary Jackson at 9:14 PM