The Secrets of Happy Families By Bruce Feiler GIVEAWAY! 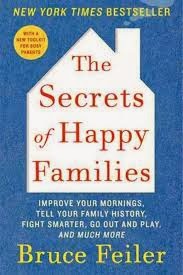 In The Secrets of Happy Families, New York Times bestselling author Bruce Feiler has drawn up a blueprint for modern families — a new approach to family dynamics, inspired by cutting-edge techniques gathered from experts in the disciplines of science, business, sports, and the military.
The result is a funny and thought-provoking playbook for contemporary families, with more than 200 useful strategies, including: the right way to have family dinner, what your mother never told you about sex (but should have), and why you should always have two women present in difficult conversations…
Timely, compassionate, and filled with practical tips and wise advice, Bruce Feiler’s The Secrets of Happy Families: Improve Your Mornings, Rethink Family Dinner, Fight Smarter, Go Out and Play, and Much More should be required reading for all parents.

Pick up your copy here 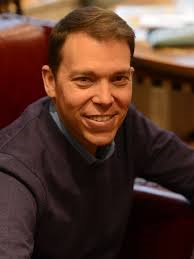 BRUCE FEILER is one of America's most popular voices on family, faith, and survival. He writes the "This Life" column about contemporary families for the Sunday New York Times and is the author of five consecutive New York Times bestsellers, including WALKING THE BIBLE and THE COUNCIL OF DADS. He is the writer/presenter of the PBS series "Walking the Bible" and the forthcoming "Sacred Journeys with Bruce Feiler." His latest book, THE SECRETS OF HAPPY FAMILIES, is a bold playbook for families today. It collects best practices for modern-day parents from some of the country's most creative minds, including tops designers in Silicon Valley, elite peace negotiators, the creators of Modern Family and the Green Berets.

His most recent bestseller, THE COUNCIL OF DADS, is the international sensation that describes how faced with one of life's greatest challenges, he asked six friends to form a support group for his young daughters. The book was profiled in PEOPLE Magazine, USA Today, Time, and the Washington Post, and was the subject of a one-hour documentary on CNN hosted by Dr. Sanjay Gupta. Bruce was named "Father of the Year" by the National Fatherhood Initiative.

Since 2001, Bruce has been one of the country's preeminent thinkers, writers, and speakers about the role of religion in contemporary life. WALKING THE BIBLE describes his perilous, 10,000-mile journey retracing the Five Books of Moses through the desert. The book was hailed as an "instant classic" by the Washington Post and "thoughtful, informed, and perceptive" by The New York Times. It spent more than a year and a half on the New York Times bestseller list, has been translated into fifteen languages, and is the subject of a children's book, a photography book, and a miniseries on PBS.

ABRAHAM recounts his personal search for the shared ancestor of Jews, Christians, and Muslims. "Exquisitely written," wrote the Boston Globe, "100 percent engaging." The book was featured on the cover of TIME Magazine, debuted in the top 5 of the New York Times bestseller list, and inspired thousands of grassroots interfaith discussions around the world.

WHERE GOD WAS BORN describes his year-long trek visiting biblical sites through the front lines of Israel, Iraq, and Iran. "Bruce Feiler is a real-life Indiana Jones," wrote the Atlanta Journal-Constitution. AMERICA'S PROPHET is the groundbreaking story of the influence of Moses on American history. Both were Top 10 bestsellers.

Bruce Feiler has written for numerous publications, including The New Yorker, The New York Times Magazine, and Gourmet, where he won three James Beard Awards. He is also a frequent contributor to NPR, ABC, NBC, CBS, CNN and Fox News. A former circus clown, he has been the subject of Jay Leno joke and a JEOPARDY! question, and his face appears on a postage stamp in the Grenadines.

A native of Savannah, Georgia, Bruce lives in Brooklyn with wife, Linda Rottenberg, and their identical twin daughters.

I am sad to say but this book is not one that I would recommend.
You can not give advice to people if you are not a professional and if you are going to write a book about something then you need to consult professionals.
Author Bruce Feiler tells that he does not want to do that.
I am not going to accept a map from someone that has never been where I want to go.
With that being said here is one thing that the author wrote in his book that made no sense to me
that teenage sexual behavior is "largely unchanged over the last sixty years" . What? Yes you read that right, the whole book is full of crazy comments like this one. What rock has this author been living under?
For the most part this book is inaccurate with very few useful tips.
I gave this book 2.5 stars.
I was given a copy of this book by the publisher.
Posted by Mary Jackson at 10:42 AM