The Desire By Dan Walsh And Gary Smalley 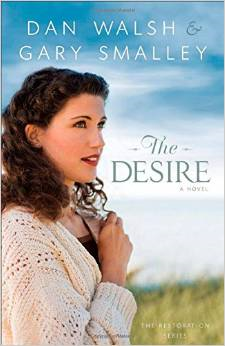 For two years, Allen and Michele have been trying to have a baby. For Michele, it has become an obsession. But Allen seems content to spend his time--and their money--saving orphans in Africa. As Michele researches their options for fertility treatments, she begins to resent Allen's divided attention. And yet, God has a plan for Allen and Michele that they could never have imagined. All it takes to set it in motion is a change of heart . . .With a keen eye toward the give-and-take of the marriage relationship, along with the ability to weave an engaging story, Dan Walsh and Gary Smalley show readers what it is to have godly desire and show selfless love. Fans will love this heartwarming story.

Dan Walsh is the bestselling author of several books, including The Dance and The Promise with Gary Smalley, as well as The Unfinished Gift, The Discovery, and The Reunion. He has won three Carol Awards, and two of his novels were finalists for RT Book Reviews Inspirational Book of the Year for 2011 and 2012. A member of American Christian Fiction Writers, Dan served as a pastor for 25 years. He lives with his wife in the Daytona Beach area, where he's busy researching and writing his next novel. Learn more at www.danwalshbooks.com.

Gary Smalley is one of the country's best known authors and speakers on family relationships. He is the bestselling and award-winning author or coauthor of 16 books, along with several popular films and videos. He has spent over 30 years learning, teaching, and counseling, speaking to over 2 million people in live conferences. Smalley has appeared on national television programs such as Oprah, Larry King Live, Extra, The Today Show, and The Sally Jessy Raphael Show, as well as numerous national radio programs. Gary and his wife, Norma, have been married for 50 years and live in Colorado.


I love The Restoration series so much! This just may have been my favorite one so far. It was a very touching and heartwarming story. The characters have become like family and with each new book in the series you learn more and more an fall in love with them all.
I fell in love with Michele and her story, I felt her hurt and in the end I felt her happiness.
I can't wait to read the next book in the series The Legacy  and hear Christina's story.
You do NOT want to miss this book, I gave it 5 stars two times. I highly recommend it.
I was given a copy of this book  by the publisher for my  honest review.
Posted by Mary Jackson at 12:53 PM