A Happy Catastrophe By Maddie Dawson 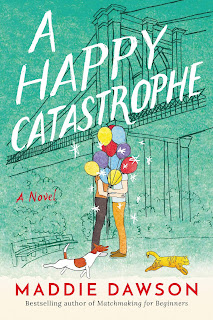 From the bestselling author of Matchmaking for Beginners comes a novel about love, loss, and the beautiful mess of family.
Marnie MacGraw and Patrick Delaney have been in love for a few years now, enough to realize that they are imperfectly perfect together. Still, there are some things that maybe need a little attention. Marnie’s ebullient; he’s brooding. She thrives on change; he prefers stability. She sees marriage and parenthood in their future, but he can’t see beyond the shadow of an earlier tragedy.
Then an eight-year-old surprise from Patrick’s past shows up on their doorstep, cartwheeling into their lives and spinning things in all directions. While it’s not exactly the change she envisioned, it looks like instant family to Marnie. But Patrick, afraid of being hurt again, retreats further into himself. Suddenly, two very different pieces of a beautiful puzzle find it harder and harder to fit. How can Marnie trust in the magic of the universe when it seems to be doing its best to knock her off her feet?
But some love stories are worth waiting for. And what’s love without a little chaos anyway? 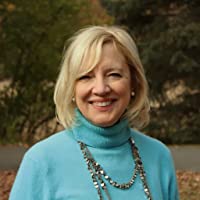 I grew up in the South, born into a family of outrageous storytellers—the kind of storytellers who would sit on the dock by the lake in the evening and claim that everything they say is THE absolute truth, like, stack-of-Bibles true. The more outlandish the story, the more it likely it was to be true. Or so they said.
You want examples? There was the story of my great great aunt who shot her husband dead, thinking he was a burglar; the alligator that almost ate Uncle Jake while he was waterskiing; the gay cousin who took his aunt to the prom, disguised in a bouffant French wig. (The aunt, not the cousin.) And then there was my mama, a blond-haired siren who, when I was seven, drove a married man so insane that he actually stole an Air Force plane one day and buzzed our house. (I think there might have been a court-martial ending to that story.)
And in between all these stories of crazy, over-the-top events, there was the hum of just daily, routine crazy: shotgun weddings, drunken funerals, stories of people’s affairs and love lives, their job losses, the things that made them laugh, the way they’d drink Jack Daniels and get drunk and foretell the future. There were ghosts and miracles and dead people coming back to life. You know, everyday stuff.
How could I turn into anything else but a writer? My various careers as a substitute English teacher, department store clerk, medical records typist, waitress, cat-sitter, wedding invitation company receptionist, nanny, daycare worker, electrocardiogram technician, and Taco Bell taco-maker were only bearable if I could think up stories as I worked. In fact, the best job I ever had was a part-time gig typing up case notes for a psychiatrist. Everything the man dictated bloomed as a possible novel in my head.
Still, I was born with an appreciation for food and shelter, and it didn’t take me long to realize that coupling a minor in journalism to my English degree might be a wise move, even though I had never for one moment felt that passion for news that my newspaper colleagues claimed beat in their breasts. I am famous for raising my hand in Journalism 101 and saying, incredulously, to the professor, “You don’t mean to tell me that every single detail in the story has to be true? Every one? Really?”
Learning to write only truth was a tough discipline, and as soon as I could, I left the world of house fires and political scandals and planning and zoning commission meetings and escaped into a world of column-writing, and then, magazine writing. (Way, way better to be assigned to think of 99 ways of getting him to declare his love, than to have to write about the bond proposal for the sewer lines.) But all along the way, in between deadlines and raising three children and driving them to their sports games and tucking them in at night and doing the laundry and telling them stories, I was really writing a novel about marriage and relationships and the way regret has of just showing up alongside your life, just when you think things are as rosy as they could be.
Today I live in Connecticut, and spend part of every day on my screened-in back porch with my trusty laptop, writing and writing and writing, looking out at the willow tree and the rosebush and the rhododendron that has a nice nest of cardinals, who I imagine to be yelling at me to get back to work whenever I wait too long to write the next sentence.
The lakehouse is gone now, and many of my more outrageous story-telling relatives are telling stories to the angels now. But even though I’m far from home, and far from the stories that nourished me in the beginning, I can still hear their voices on the breeze, still recall the buzz of the Air Force jet that had come to take my mother away until my father stepped in and said: “No. No. She’s mine.”
Wait. Is that what he said? Or was he not home that day? You know, now that I think of it, it might have been just my mother and me at home just then, running outside in our excitement, my mother’s cheeks burning red, her eyes frightened and dancing, as the wings dipped and did a little salute to her and to love and to unrequited passion…and probably to hope that she would leave my father and run away. I do remember being scared and exhilarated both, seeing that my mother had this power and this whole other life besides the one I spent with her.
And I remember the wide Florida sky and the heavy, humid air and the loudness drowning out everything but the thought that we never ever know what’s going to happen. And knowing, even at seven, that that was probably a good thing.
Keeps it interesting, you know.

I did not read the first book in this sweet series. But I would say this can be read as a stand alone. I will go back and read the first book now. I really hope that everyone reads this series.
You are going to be pleasantly surprised by this one.
I gave this book 4 stars.
The Mary Reader received this book from the publisher for review. A favorable review was not required and all views expressed are our own.
Posted by Mary Jackson at 4:03 AM