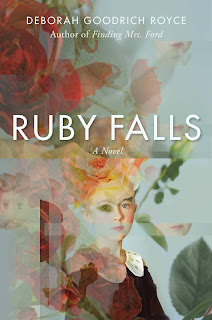 Like the chilling psychological thriller The Silent Patient, Deborah Goodrich Royce’s Ruby Falls is a nail-biting tale of a fragile young actress, the new husband she barely knows, and her growing suspicion that the secrets he harbors may eclipse her own.On a brilliantly sunny July day, six-year-old Ruby is abandoned by her father in the suffocating dark of a Tennessee cave. Twenty years later, transformed into soap opera star Eleanor Russell, she is fired under dubious circumstances. Fleeing to Europe, she marries a glamorous stranger named Orlando Montague and keeps her past closely hidden.Together, Eleanor and Orlando start afresh in LA. Setting up house in a storybook cottage in the Hollywood Hills, Eleanor is cast in a dream role—the lead in a remake of Rebecca. As she immerses herself in that eerie gothic tale, Orlando’s personality changes, ghosts of her past re-emerge, and Eleanor fears she is not the only person in her marriage with a secret.In this thrilling and twisty homage to Daphne du Maurier’s Rebecca, the story ricochets through the streets of Los Angeles, a dangerous marriage to an exotic stranger, and the mind of a young woman whose past may not release her.
Pick up your copy here...
Amazon.com: Ruby Falls: A Novel (9781642937091): Royce, Deborah Goodrich: Books

Deborah Goodrich Royce's first psychological thriller, Finding Mrs. Ford, was published in 2019 to rave reviews. Her second, Ruby Falls, will come out on May 4, 2021.Deborah began her acting career in 1982 in the lead role of Silver Kane (sister of the legendary, Erica Kane) on ABC’s ALL MY CHILDREN. She went on to star in dozens of feature films, television shows, mini-series and TV movies.After the birth of her daughters, she moved with her family to Paris and worked as a reader for le Studio Canal Plus. In the 1990’s, Deborah was the story editor at Miramax Films, overseeing readers, manuscript acquisitions and script development, including editing such notable screenplays as EMMA by Doug McGrath.With writing partner, Mitch Giannunzio, Deborah won a grant from the Massachusetts Arts Council in 2002 to develop and workshop their original screenplay, SUSAN TAFT HAS RUN AMOK.With her husband, Chuck, Deborah restored the1939 Avon Theatre in Stamford, CT. Under her leadership, the Avon hosts an ongoing series of film luminaries, most recently, Mira Nair, Richard Gere and Chloe Sevigny. The late Gene Wilder, a longstanding advisory board member of the Avon, was an early advocate for Deborah’s writing.Deborah and Chuck have also restored several hotels (Ocean House, Deer Mountain Inn, and Weekapaug Inn), a bookstore (The Savoy in Westerly, RI), and numerous other “Main Street” buildings. Deborah serves on multiple boards, including the national council of the American Film Institute, the executive board of the Greenwich International Film Festival, and the governing boards of the New York Botanical Garden, the Greenwich Historical Society, and the PRASAD Project.
My Thoughts...
Griping, face paced, so many twists that will blow your mind. You will be shaking your head.
I love a good mystery and Royce gives you all this in one book.
I recommend this 4 star and I hope that you will grab a copy to enjoy.
The Mary Reader received this book from the publisher for review. A favorable review was not required and all views expressed are our own.
Posted by Mary Jackson at 2:28 AM