Ten Rules for Marring a Duke By Michelle Mclean 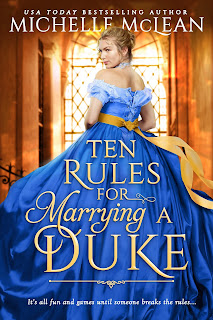 Bookish Arabella Bromley never gave a fig for society’s rules―until her sister ran off with a man below her station. Now Arabella is desperate to restore her family’s ruined reputation to favor amongst the ton. She’ll have to marry quickly and well. But in order to carry off her plan, Arabella needs a duke… and she has just the rakish fellow in mind.The Duke of Whittsley has an ungentlemanly tendency to disregard the rules. Unfortunately, a sense of mischief doesn’t excuse a high-ranking noble from family duty―especially where it concerns producing a son. And that’s where he can’t quite resist Arabella’s distinctly outrageous plan: if he saves her family, she’ll give him an heir.
Now the deal’s been struck. They have one year to achieve their goals and ten iron-clad rules to keep them on track. Like long, scorching kisses and ensuring they’re both exquisitely satisfied. And the only thing that could ruin their plan is the one thing they never planned on: love.
Pick up your copy here...
Ten Rules for Marrying a Duke: McLean, Michelle: 9781649373236: Amazon.com: Books 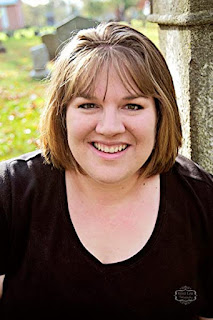 Michelle McLean is a jeans and t-shirt kind of girl who is addicted to chocolate and Goldfish crackers and spent most of her formative years with her nose in a book. She has degrees in history and English and is thrilled that she sort of gets to use them. Her novel Truly, Madly, Sweetly, written as Kira Archer, was adapted as a Hallmark Original movie in 2018.

When Michelle’s not working, reading, or chasing her kids around, she can usually be found baking, diamond painting, or trying to find free wall space upon which to hang her diamond paintings. She resides in PA with her husband and two teens, the world’s most spoiled dog, and a cat who absolutely rules the house. She also writes contemporary romance as USA Today bestselling author Kira Archer.

For more info on Michelle and her work, please visit her website at michellemcleanbooks.com.