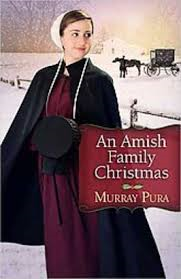 After tragedy strikes the family of young Naomi Miller, her friend Rebecca Bachman does all she can to help. But things get complicated when Rebecca's brother, Micah, returns from a combat tour in Afghanistan. For one thing, he chose to serve in the military even though he served as a medic and never picked up a gun. For another, he is under the Meidung--the shunning-- because of that and none of the Amish are permitted to speak to him or eat with him. And finally, he is not only Rebecca's brother, he is Naomi's husband! But how can Naomi pick up where their marriage left off after he turned away from her and his people to enlist in the army? How can Naomi and Micah even begin the process of healing their relationship when he will not repent of what he has done and the Amish will not forgive him for what he has done? Naomi despairs of ever again having a happy married life with her husband.
But God has a way of working on the hearts of His people--especially at Christmas time. When an unexpected turn of events sets things right, miracles happen to the Amish community, to the Miller family, and to Naomi and Micah, miracles that transform everyone.
Here is warm and tender story of faithfulness, love, and reconciliation at the most wonderful time of the year.
Pick up your copy here
http://www.amazon.com/Amish-Family-Christmas-Murray-Pura/dp/0736952373/ref=tmm_pap_title_0?ie=UTF8&qid=1382069823&sr=1-1

Murray Andrew Pura was born in Winnipeg, Manitoba, Canada, and has traveled extensively throughout Canada, the United States, Europe, Asia, and the Middle East. Ordained as a Baptist minister in 1986, Pura has served five churches in Canada and headlined numerous speaking engagements in Canada and the United States. He has five books published, was a contributor to the Life With God Bible, has been a finalist for The Paraclete Fiction Award, The Dartmouth Book Award, and The John Spencer Hill Literary Award, and has been shortlisted for the prestigious 2010 Kobzar Literary Award of Canada.

I have to say this is Mr. Pura's best book yet in my opinion. I read it in no time it is a fast read and it is well written. I was very pleased with this Christmas story. This is a book that you can read while wrapped in a quilt and drink your hot chocolate and enjoy in an afternoon.
I recommend this book and I give it 5 stars.
I was given a copy of this book by the publisher for my honest review.
Posted by Mary Jackson at 11:06 AM