Only By Death By Kathy Herman 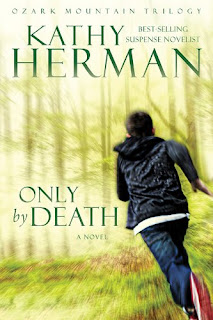 Is Liam Berne a loving son—or a murderer? The second book in the Ozark Mountain Trilogy, Only by Death is a thought-provoking suspense story of a man who loses everything and learns he must die to find life.

After much agonizing, Liam Berne takes his mother, who has Alzheimer’s, to the Sure Foot River and drowns her. A mercy killing, he tells himself, to spare her years in a nursing home. And getting his inheritance early isn’t a bad thing either.

Dixie Berne’s body is recovered and the coroner cannot find any sign of foul play, though Liam’s sister isn’t convinced. Then Liam hears rumors that a twelve-year-old boy has witnessed the drowning. Terrified that he will be discovered, Liam sets out to intimidate the boy into silence. Little does Liam know that someone else suspects him—someone who intends to make him pay. 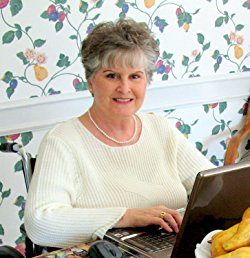 Kathy Herman is no stranger to the Christian publishing industry. Before becoming a bestselling author and award-winning poet, Kathy worked on staff at the Christian Booksellers Association for five years. She gained eleven years of bookstore experience as a children's products specialist and drew on that expertise to conduct related seminars in the U.S. and Canada.

Kathy quickly rose to the rank of bestselling author when her first novel, TESTED BY FIRE, became a CBA bestseller shortly after its release. Since then, eight more of her novels have claimed the title of bestseller: ALL THINGS HIDDEN, THE REAL ENEMY, THE LAST WORD, THE RIGHT CALL,FALSE PRETENSES,DANGEROUS MERCY, RELENTLESS PURSUIT and NOT BY SIGHT.

Her contemporary, fast-paced novels weave inspirational messages into the storyline so effectively that a college professor in Houston utilized her books as required reading to educate students on the value of teaching through fiction. Kathy's books have also been widely used in book club discussion and Bible study groups.

Kathy and her husband Paul live in East Texas and have three grown children, five "nearly perfect" grandchildren, and an adorable cat named Samantha. Her hobbies include photography and bird watching--especially an ongoing fascination with hummingbirds.

I can't say enough good things about this book. The characters were very well  developed and the plot was solid.  One thing about this book was that I fell in love with the family. The love for one another in the family was bar none. Jesse had the faith of a young man that I wish our youth today had. I was taken in by the story from the first page. I must say that part of the plot was very thought provoking.

I gave this book 5 stars. I recommend this book as well as book 1 in the Ozark Mountain Trilogy series.
The Mary Reader received this book from the publisher for review. A favorable review was not required and all views expressed are our own.
Posted by Mary Jackson at 6:03 AM