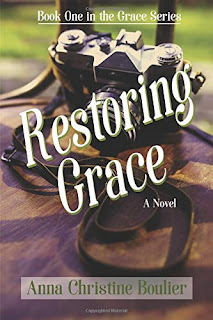 Viviane Stanton-Mays has spent the last ten years making a life in Atlanta but finds herself worried the Grandmother who raised her is hiding a serious illness. Headed back to Cartersville to visit her Grand for a month to determine how sick she is, Viviane will be forced to face her high school sweetheart, Cole West, the man who broke her heart since he is now the current youth minister at their hometown church. Viviane doesn’t know that her Grandmother has concocted a plan to bring her back to face Cole and marry the man she let get away ten years ago. Trouble abounds, because Grand doesn’t know why the couple broke up, she only knows that Viviane and Cole are meant for each other and will do whatever it takes to see them reunited. Will Grand’s plan succeed or will Viviane and Cole’s past keep them apart?

Anna Christine Boulier has been a writer/storyteller since she begged her mother to learn to read before she entered first grade- to the bane of her first grade teacher. Since then she has written short stories and had characters that lived in her head for years. In May of 2013, God gave her a story and she wrote it in six weeks. Once the first book lived on paper she couldn’t stop. She currently has three books written with more on the way.

She grew up in Cartersville and except for a brief stint in Atlanta for college, she’s been there ever since. If you meet her, she can tell you more, because it’s a story! Writing is not full time, she pays the bills with a full time job that helps her stay creative.

Writing is my testimony- Grace my story!
It isn’t just a tagline, but a way of life.

I'm not giving my thoughts on this book or this series. I want to be kind so I will just feature it on my blog and let everyone make their on choice.
It is self published, I wanted to be sure and let you all know that.
Posted by Mary Jackson at 7:24 AM