The Liberty Bride By MaryLu Tyndall 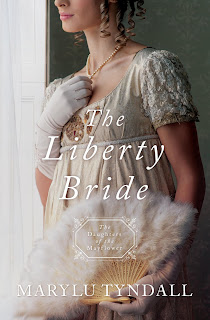 Lieutenant Owen Masters and Emeline Baratt meet on a British warship as sworn enemies. Where will Emeline place her loyalties when forced to spy against her country?
A brand new series for fans of all things related to history, romance, adventure, faith, and family trees.

War Forces a Choice Between Love and Country
A trip home from England to Maryland in 1812 finds Emeline Baratt a captive on a British warship and forced to declare her allegiance between the British and Americans. Remaining somewhat politically neutral on a ship where her nursing skills are desperately needed is fairly easy—until she starts to have feelings for the first lieutenant who becomes her protector. However, when the captain sends her and Lieutenant Owen Masters on land to spy, she must choose between her love for him and her love for her country.

Join the adventure as the Daughters of the Mayflower series continues with The Liberty Bride by MaryLu Tyndall. 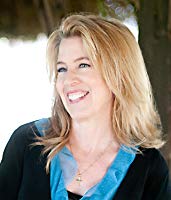 Award winning and best-selling author, MaryLu Tyndall dreamt of pirates and sea-faring adventures during her childhood days on Florida's Coast. After obtaining a degree in Math and working as software engineer for 15 years, she decided to test the waters as a writer. With now more than seventeen books published, she makes no excuses for the deeply spiritual themes embedded within her romantic adventures. As a follower of Christ, her stories often reflect her own journey and walk with God. Her hope is that readers will not only be entertained but will be brought closer to the Creator who loves them beyond measure. In a culture that accepts the occult, wizards, zombies, and vampires without batting an eye, MaryLu hopes to show the awesome present and powerful acts of God in a dying world. MaryLu makes her home with her husband, six children, two grandkids, and three cats on the California coast, where her imagination still surges with the sea.


This series Daughters of the Mayflower has not been the best but I did like this one the best out of all of them.
Tyndall is a good author and historical fans are going to like this one by her.
A good clean fun read. I gave this book 4 stars. Give it a try.
The Mary Reader received this book from the publisher for review. A favorable review was not required and all views expressed are our own.
Posted by Mary Jackson at 7:52 AM