Girl in the Rearview Mirror By Kelsey Rae Dimberg 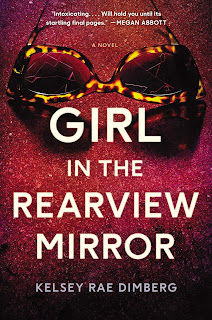 The young nanny for a prominent political family gets drawn into a web of deadly lies—including her own—in this stunning debut thriller with the menacing twists of Megan Abbott and the exquisite suspense of Laura Lippman.

They are Phoenix’s First Family: handsome Philip Martin, son of the sitting Senator, an ex-football player who carries himself with an easy grace and appears destined to step into his father’s seat when the time is right; his wife Marina, the stylish and elegant director of Phoenix’s fine arts museum; and their four-year-old daughter Amabel, beautiful and precocious and beloved.
Finn Hunt is working a dull office job to pay off her college debt when she meets Philip and charms Amabel. She eagerly agrees to nanny, thinking she’s lucked into the job of a lifetime. Though the glamour of the Martins’ lifestyle undeniably dazzles Finn, her real pleasure comes from being part of the family: sharing quick jokes with Philip in the kitchen before he leaves for work; staying late when Marina needs a last-minute sitter; and spending long days with Amabel, who is often treated more like a photo op than a child.
But behind every façade lurks a less attractive truth. When a young woman approaches Finn, claiming a connection with Philip and asking Finn to pass on a message, Finn becomes caught up in a web of deceit with the senate seat at its center. And Finn isn’t exactly innocent herself: she too has a background she has kept hidden, and under the hot Phoenix sun, everything is about to be laid bare.

Kelsey Rae Dimberg received an MFA from the University of San Francisco and studied at Barrett Honors College of Arizona State University, where she was editor-in-chief of the literary magazine, Lux, and received the Swarthout Award in Fiction. Girl in the Rearview Mirror is her first novel. Born in Seattle, Kelsey has lived in eight states, and currently resides in Milwaukee.


My Thoughts...
This was slow starting out but when it got good it got really good. I did not like the ending at all. I must say the good parts were good parts. (Ha HA Like that). But I like Finn the detective that is what I like to call her. She had her nose in everything.
I will be looking for Dimberg's next book.
I gave this book 3.5 stars. Pick up a copy and let me know what you think about it.
The Mary Reader received this book from the publisher for review. A favorable review was not required and all views expressed are our own.
Posted by Mary Jackson at 5:32 AM