Rough Way to the Highway By Kelly McCoy 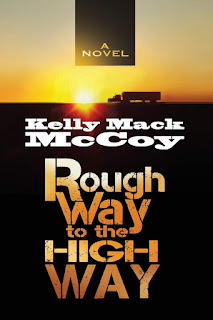 Pastor turned long-haul trucker, Mack, struggles with grief and perceived failures as a minister while he is confronted with a mysterious hitchhiker, smugglers, and a determined killer. After an unbearable tragedy strikes his life, he sells everything he owns and buys a new Peterbilt truck, returning to the trade he learned decades earlier.
Hoping for some windshield therapy and peace of mind behind the wheel of his new rig, Mack gets neither after God nudges him to pick up a hitchhiker near the Jordan State Prison outside Mack’s childhood home of Pampa, Texas.
When his world is ripped apart, he seeks to run away from it all, going as far as to cut off communication with all but a handful of people. But he is pursued by God, who will not let him go. Unbeknownst to Mack, God is equipping His servant with tools to handle events his past education and experience could never have prepared him for.
The story unfolds as the hitchhiker enters Mack’s Peterbilt. The man reminds Mack of his father, a hard living, hard drinking oilfield roughneck who died in prison. God begins to do a work in Mack’s heart while Mack seeks to minister to his new passenger. But Mack soon rues the day he let the hitchhiker into his truck.
His old life in ruins now, Mack learns he has angered a new enemy who threatens to destroy his life on the road as well. Mack suspects he is being followed and is in the sights of a killer who plots a revenge no one could have seen coming.
God works His mysterious way in Mack’s life steamroller-style all the way to an ending that will leave the reader thinking about it long after reading The End at the bottom of the last page.
Rough Way to the High Way is the first of a series of novels about Mack’s adventures on the road as lives are transformed through his new ministry. The first life to be transformed as Rough Way to the High Way develops appears to be that of the hitchhiker. But God is working in Mack’s life all along, preparing him for a new ministry that will transform lives across the country.

Pick Up your copy here... 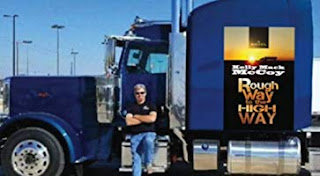 Kelly Mack McCoy is a semi (pun intended) retired truck driver turned author. He spent most of his career behind the wheel of an eighteen-wheeler traveling extensively through forty-eight states gathering a lifetime of material for his books. Rough Way to the High Way is his first novel and the first in a series of novels about the adventures of trucker turned pastor turned trucker Mack McClain.