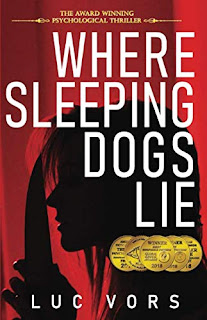 Psychologist Dr. Alan Greene is no stranger to stepping across the line with his students, but when he sleeps with a patient of his, the results are deadly.

Alyson was the perfect test subject for a new treatment that deliberately creates multiple personalities. The method was brilliant, but when things heat up between her and Dr. Greene, new "unauthorized" personalities start taking over.
A monster awakens, the slaughter begins, and a secret is revealed in the crime scenes.
Alyson is a killer the FBI has been chasing for years.
Now, it’s up to forensic psychologist, Dr. Roni Price, to hunt Alyson down before she kills again, but with no leads and a witness who refuses to talk, it’s anyone’s guess as to how, or even if, Alyson will ever get caught.
A mind-blowing thriller, with twist after twist, Where Sleeping Dogs Lie is a journey into the psychotic wonderland of a killer whose innocence somehow remains intact. 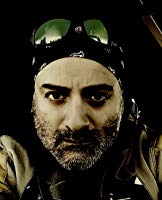 Luc Vors is a native Texan with education in Art, Psychology, Biology and Music, and with advanced education in Clinical and Industrial Psychology. He describes himself as "an artist, first, and a scientist, second," and "obsessed with finding the truly unique."
"I kind of never stood a chance at being normal," said Luc, who champions his parents as creative and educated in multiple forms of science, computer engineering and art. "Growing up, I was constantly exposed to creative ways of thinking and seeing things. My father is a computer engineer, known for his inventiveness, and was instrumental in solving several computer programming problems that major industries are still using today. My mother, a potter and a nurse, comes from a long family history of artists and writers... and while they insist that they are boring and mundane, they are both quite weird."
Growing up, Luc's parents encouraged him to explore and experiment, whether in science, music, theater or art. As an artist, Luc has applied his talents to a multitude of media, including professional works in photography, graphic design, drawing and painting. And in science, he contributed to academic studies in human consciousness, free will, and creativity theory, furthering the understanding of such hot topics as synchronicity, ecological consciousness, aesthetics, existentialism and the fate versus freewill dichotomy.
Luc is currently working on his books, Tether, and The Prophet, and putting the finishing touches on two board games, Conspiracy and Quadrangles.

My Thoughts...
I'm not giving anything away. So all I will say is read it. You will not see the ending coming. You will be sitting on pins and needles waiting on
Vors next book.
I gave this book 4 stars.
The Mary Reader received this book from the publisher for review. A favorable review was not required and all views expressed are our own.