Staying On The Vine By Gordon Castelnero 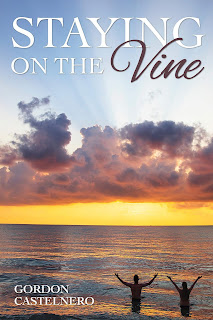 Like so many Americans, Lindsay Kish and Nick Robinson grew up as Christians in name only. Their true perceptions of life mirrored the idolatry of the world in rejection of God. Both of them nurtured appetites for their biggest vices, which tainted their judgement in romantic relationships. Their spiritual darkness ultimately led them down the aisle to childless marriages besieged by never-ending sins. Yet, during their trials of tribulation, God always threw them a lifeline of grace through revelations they routinely ignored, but would come to embrace after hitting rock bottom.
Based on a true story, Staying on the Vine is portrayed through character-driven backstories depicting the doubtful romance between two mid-life divorcees who ignored God's many calls, until they came together as the result of answered prayer. All of the disastrous choices made by Lindsay and Nick are typical of most non-believers who seek fulfillment in everything but God. Their second chance at marriage and a better life, in Christ, is an inspirational testament that failure is not final!

Gordon Castelnero has authored two nonfiction books and produced acclaimed documentaries for Detroit television. His passion for writing compelling stories and his faith in Christ have attributed to this novel. He lives in southeast Michigan with his wife and daughter.