A Wealth of Pigeons By Harry Bliss and Steve Martin 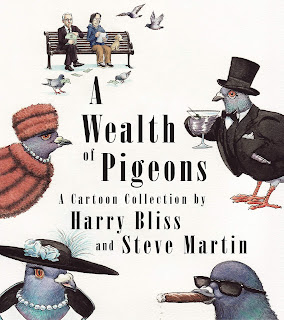 “I've always looked upon cartooning as comedy’s last frontier. I have done stand-up, sketches, movies, monologues, awards show introductions, sound bites, blurbs, talk show appearances, and tweets, but the idea of a one-panel image with or without a caption mystified me. I felt like, yeah, sometimes I’m funny, but there are these other weird freaks who are actually funny. You can understand that I was deeply suspicious of these people who are actually funny.”
So writes the multitalented comedian Steve Martin in his introduction to A Wealth of Pigeons: A Cartoon Collection. In order to venture into this lauded territory of cartooning, he partnered with the heralded New Yorker cartoonist Harry Bliss. Steve shared caption and cartoon ideas, Harry provided impeccable artwork, and together they created this collection of humorous cartoons and comic strips, with amusing commentary about their collaboration throughout. The result: this gorgeous, funny, singular book, perfect to give as a gift or to buy for yourself.
Pick up your copy here...
https://www.amazon.com/Wealth-Pigeons-Cartoon-Collection/dp/1250262895/ref=sr_1_1?crid=65DJMXZLND2W&dchild=1&keywords=a+wealth+of+pigeons+a+cartoon+collection&qid=1606585445&sprefix=A+Wealth+of+%2Caps%2C170&sr=8-1 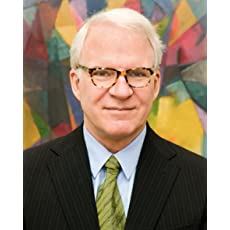 Steve Martin is one of today's most talented performers. His huge successes as a film actor include such credits as ROXANNE, FATHER OF THE BRIDE, PARENTHOOD and THE SPANISH PRISONER. He has won Emmys for his television writing and two Grammys for comedy albums. In addition to the bestselling PURE DRIVEL, he has written several plays, including Picasso at the Lapin Agile and a highly acclaimed novel, SHOPGIRL. His work appears in The New Yorker and The New York Times.
My Thoughts...
This was such a great coffee table book. It would be perfect as a conversation starter in your living room.
It would make a fantastic gift as well.
I have always been a fan of Steve Martins and this is just the nicest treat to have received.
I hope that you grab a copy or two and enjoy this. You will love the illustrations also.
The Mary Reader received this book from the publisher for review. A favorable review was not required and all views expressed are our own.
Posted by Mary Jackson at 5:48 AM