Amid Rage By Joel Burcat 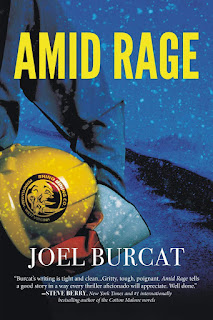 A psychotic coal mine operator and cynical neighbors with an anti-mining agenda fight out a strip mine permit battle. Mike Jacobs, a 28-year old environmental prosecutor with Pennsylvania's environmental agency, DEP, is caught between the warring factions, but is ordered to "babysit" the case. All Mike wants to do is to protect the environment and neighbors from certain harm as a result of the proposed mining. Sid Feldman, the Philadelphia lawyer for the mine operator, who oozes power and privilege, offers Mike a job midway through the proceedings. Miranda Clymer, the lawyer for the neighbors, pulls out all the stops to win Mike's affection and assistance. Mike's nearest and dearest friend, Nicky Kane is by his side as his paralegal. Mike must use all of his talents as a lawyer and rely on his discretion and courage to do what is right and not anger the political bosses for whom he works. In the cataclysmic ending, someone will die, but who?
Pick up your copy here...
Amid Rage: Joel Burcat: 9781951556457: Amazon.com: Books

Joel Burcat is an author and environmental lawyer. DRINK TO EVERY BEAST (Headline Books, 2019) was his debut novel. It is an environmental legal thriller about illegal dumping of toxic waste. AMID RAGE (Headline Books, 2021) is his second novel. It is an environmental legal thriller about coal strip mining. He has won awards from PennWriters, New York Festival of Books, Readers' Favorite, ScreenCraft, and others.He has written dozens of short stories (from the best beer he ever had, to horror, to murder for hire) and six have been published. His short stories have also won awards."I want my readers to feel they are with my characters in the courtroom, a canoe on a polluted river, or a strip mine. I want them to see, feel, and smell what the characters are seeing, feeling, and smelling. If my characters are scared, I want my readers to be scared too. That is the ultimate goal of a writer."He was selected as the 2019 Lawyer of the Year in Environmental Litigation (for Central PA) by Best Lawyers in America. He has been designated by both “Super Lawyers” and “Best Lawyers” for environmental and oil and gas law. In addition to his law practice, he has edited two non-fiction books on environmental and energy law and has written numerous professional articles on environmental law.
Burcat lives in Harrisburg, PA with his wife, Gail. They have two grown daughters, a son-in-law and granddaughter.
My Thoughts...
I love legal thrillers. So when asked to review this legal thriller I jump right on it. It was very well thought out. I did read it fairly quickly and it was insightful and doe well.
It is book two in the Mike Jacobs series. I did not read the first book and I think this one can be read as a stand alone. I don't think I missed much from the first one.
I gave this book 3 stars.
The Mary Reader received this book from the publisher for review. A favorable review was not required and all views expressed are our own.
Posted by Mary Jackson at 4:59 AM