Her Honor By LaDoris Cordell 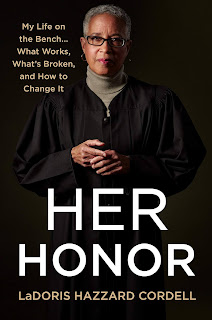 In Her Honor, Judge LaDoris Hazzard Cordell provides a rare and thought-provoking insider account of our legal system, sharing vivid stories of the cases that came through her courtroom and revealing the strengths, flaws, and much-needed changes within our courts.Judge Cordell, the first African American woman to sit on the Superior Court of Northern California, knows firsthand how prejudice has permeated our legal system. And yet, she believes in the system. From ending school segregation to legalizing same-sex marriage, its progress relies on legal professionals and jurors who strive to make the imperfect system as fair as possible.Her Honor is an entertaining and provocative look into the hearts and minds of judges. Cordell takes you into her chambers where she haggles with prosecutors and defense attorneys and into the courtroom during jury selection and sentencing hearings. She uses real cases to highlight how judges make difficult decisions, all the while facing outside pressures from the media, law enforcement, lobbyists, and the friends and families of the people involved.Cordell’s candid account of her years on the bench shines light on all areas of the legal system, from juvenile delinquency and the shift from rehabilitation to punishment, along with the racial biases therein, to the thousands of plea bargains that allow our overburdened courts to stay afloat―as long as innocent people are willing to plead guilty. There are tales of marriages and divorces, adoptions, and contested wills―some humorous, others heartwarming, still others deeply troubling.
Her Honor is for anyone who’s had the good or bad fortune to stand before a judge or sit on a jury. It is for true-crime junkies and people who vote in judicial elections. Most importantly, this is a book for anyone who wants to know what our legal system, for better or worse, means to the everyday lives of all Americans.
Pick up your copy here...
Her Honor: My Life on the Bench...What Works, What's Broken, and How to Change It: Cordell, LaDoris Hazzard: 9781250269607: Amazon.com: Books

LaDoris Hazzard Cordell, a 1974 graduate of Stanford Law School, was the first lawyer to open a law practice in East Palo Alto, a low-income community of color. In 1978, she was appointed Assistant Dean for Student Affairs at Stanford Law School, where she implemented a successful minority admissions program.In 1982, Governor Jerry Brown appointed Ms. Cordell to the Municipal Court of Santa Clara County. In1988, Judge Cordell won election to the Superior Court of Santa Clara County, making her the first African American woman to sit on the Superior Court in northern California.In 2001, she retired from the bench to become Vice Provost & Special Counselor to the President for Campus Relations at Stanford University. She left that position in 2009.In 2003, accepting no monetary donations, Judge Cordell, ran a grassroots campaign and won a 4-year term on the Palo Alto City Council.Judge Cordell was the Independent Police Auditor for the City of San Jose for five years (2010-2015. Under her leadership, the office gained national prominence.In 2016, Judge Cordell chaired a Blue-Ribbon Commission in Santa Clara County that investigated the jails in the aftermath of the murder of an inmate by jail guards; she also served on a Blue Ribbon Panel that evaluated the culture of the San Francisco Police Department after racist and sexist text messages surfaced.In 2018, Judge Cordell was the voice of the opposition and campaigned vigorously against the recall of Judge Aaron Persky.Judge Cordell has been an on-camera legal analyst for CBS-5 television and a guest commentator on Court TV, MSNBC’s “The Weekend with Joshua Johnson,” and “The Mehdi Hasan Show” on NBC’s Peacock Network.She is a mother and lives in Palo Alto with her partner of 30+ years. In her spare time, Judge Cordell is a pianist, vocalist, portrait artist, cartoonist.Her forthcoming memoir, Her Honor, will be released in Fall 2021 by Celadon, a division of Macmillan Publishing.
My Thoughts...
Oh to get the inside scoop from a judge. From one who has never had to go to court never murdered anyone or sold drugs or  embezzled  from a company or done all the things that judges have to wad through to get to the bottom of.
The pressure of having to judge someone has to be very hard day in and day out. To be an African  American Women has to be even harder.
So this was a very interesting read.
4 stars and You should grab a copy.
The Mary Reader received this book from the publisher for review. A favorable review was not required and all views expressed are our own.
Posted by Mary Jackson at 4:01 AM