After We Were Stolen by Brooke Beyfuss 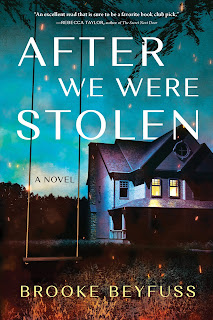 A fire. Her escape. And the realization her entire life has been a lie.

When nineteen-year-old Avery awakens to flames consuming her family's remote compound, she knows it's her only chance to escape her father's grueling survival training, bizarre rules, and gruesome punishments. She and her brother Cole flee the grounds for the first time in their lives, suddenly homeless in a world they know nothing about. After months of hiding out, they are arrested for shoplifting and a shocking discovery is made―Avery and Cole were kidnapped fifteen years earlier, stolen by cult leaders they knew as Mom and Dad.

Cole is immediately returned to his birth family, leaving Avery alone and desperate. She is uncertain if her "parents" survived the fire and is terrified to find out. The loss of Cole and the trauma of her former life threaten to undo her, but when the police investigation reveals there may be more survivors, Avery must uncover the truth about the fire to truly be free.