A Woodland Miracle By Ruth Reid 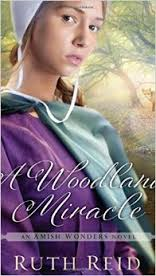 For a disadvantaged young woman and a displaced young man, a lasting love is going to take more than chance—it’s going to take a miracle.
Muscle weakness has left Grace Wagler with a broken body—and her childhood best friend has left her with a broken heart. She can hold her own in the timber camp (and do everything else the other women in Badger Creek can do), but in an Amish district where women outnumber men three to one, marriage is an unlikely prospect for a girl with bad legs.
Ben Eicher just arrived in Michigan from Pinecraft, Florida. When his most recent shenanigans proved too much for his daed’s patience, Ben was sent to the Upper Peninsula to work in the lumber camp—and he’s neither proud of his behavior nor thrilled about his new home.
But when Ben meets Grace, the struggling young woman quickly piques his curiosity. Of course, the last thing Grace wants is another friendship with a man who pities her. Tired of physical pain and romantic dead ends, Grace is ready to leave Badger Creek for the muscle specialist in Ohio, even if it contradicts her father’s wishes . . . and Ben’s.
Meanwhile, two dangerous men have found their way into the district. It isn’t long before their unsavory plans ensnare Grace and Ben in a chase that will not only endanger their lives . . . but test their love.

Ruth Reid is a CBA and ECPA best-selling author of the Heaven on Earth series. She's a full-time pharmacist who lives in Florida with her husband and three children. When attending Ferris State University School of Pharmacy in Big Rapids, Michigan, she lived on the outskirts of an Amish community and had several occasions to visit the Amish farms. Her interest grew into love as she saw the beauty in living a simple life.


Well Ruth Reid has done it again,  A super inviting book. I was wowed from page one in her latest romance novel. Ruth has a voice for the Amish like no other.
I was taken by A Woodland Miracle. It is a true Amish Wonder Novel for sure. One that you will be talking about for a while.
I read this book in one afternoon and I am so ready for Ruth's next book.
I gave this book 5 stars and I HIGHLY recommend it.
I was given a copy of this book by the publisher for my honest review.
Posted by Mary Jackson at 11:30 PM