The Song By Chris Fabry 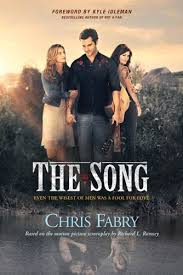 Jed King’s life has been shaped by the songs and mistakes of his famous father. He wants to sing his own song, but the words and melody are elusive. Haunted by the scars inflicted by his broken family, Jed’s dreams of a successful music career seem out of reach . . . until he meets Rose.
As romance quickly blooms, Jed pens a new song and suddenly finds himself catapulted into stardom. But with this life of fame comes temptation, the same temptation that lured his father so many years ago.
Set in the fertile mid-South, this quest for success leads Jed and Rose on a journey that will force them to deal with the pain of loss, failure, and the desire to be who God created them to be.
Lyrical and deeply honest, The Song asks the hard questions of love and forgiveness. When even the wisest of men are fools in love, can true love persevere? 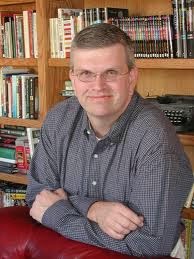 I was born in West Virginia in 1961. I read a lot, but not very fast, and wrote poems, songs, and transcribed Marx Brothers movies and memorized dialogue.

In 1984 I met Jerry Jenkins at Moody Bible Institute. He offered to help me learn to write and I took him up on the offer. In 1998, Jerry and Dr. Tim LaHaye hired me to help write the Left Behind: The Kids series. After that I worked on several other series for children and then published my first adult novel in 2008. It took more than six years to write Dogwood and find a publisher. It received a 2009 Christy Award.

My next novel, June Bug, drew its themes from the classic Victor Hugo tale, Les Miserables. Then, Almost Heaven released and also won a Christy Award, as well as the 2011 Christian Book Award for Fiction.

Not in the Heart is another riveting, suspenseful, and yet relational story. A mystery within a mystery within an addiction. I dedicate it to all who have someone in their life who is addicted. This story also received a Christy award.

Borders of the Heart is my nod toward some of the great western writers--Cormac McCarthy and Larry McMurtry. It's a love story, a painful story of loss, a mystery, and an edge-of-your-seat thriller. I hope you enjoy the ride through Tucson and the surrounding area as much as I did.

I graduated from the W. Page Pitt School of Journalism at Marshall University in Huntington, West Virginia. I have been married to Andrea since 1982. We have nine children. In October of 2008 our family evacuated our house in Colorado, leaving behind all our belongings because of a toxic mold situation. Since then we have been living near Tucson, Arizona, working on recovering our health after the mold exposure.

Stop by my website at www.chrisfabry.com to learn more about my writing and radio endeavors, and be sure to sign up for my online newsletter, the FABRYGRAM. I can also be found on Facebook and Twitter, or you can email me at chris@chrisfabry.com.
I'm Chris Fabry's biggest fan so when I found out this book and movie was coming out I had to read it right away. Let me tell you all something this is my pick for book of the year!
This was such a fantastic book about love and forgiveness  A very healing read. You will not soon forget the characters and you will be so sad to read the last page. I did not want the book to end.
I gave this book 2 stars two times! I HIGHLY recommend this book and go see the movie, or better yet pick up a copy of the movie on DVD after you read the book of course.
I was given a copy of this book by the publisher for my honest review.
Posted by Mary Jackson at 12:52 PM