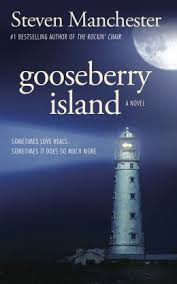 They met at the worst possible moment...or maybe it was just in time. David McClain was about to go to war and Lindsey Wood was there at his going-away party, capturing his heart when falling for a woman was the last thing on his mind. While David was serving his country, he stayed in close contact with Lindsey. But war changes a person, and when he came home very little had the same meaning that it had before – including the romance that had sustained him. Was love truly unconquerable, or would it prove to be just another battlefield casualty?

Gooseberry Island is the most nuanced, dramatic, and romantic novel yet from a writer whose ability to plumb the depths of human emotion knows few peers.

Steven Manchester is the author of the #1 bestsellers, Twelve Months and The Rockin' Chair. He is also the author of the award-winning novel, Goodnight, Brian, as well as the critically-acclaimed novel, Pressed Pennies, A Christmas Wish (Kindle exclusive), Wilbur Avenue (novella), Just in Time (novella), The Thursday Night Club (novella, released November 2014) and Gooseberry Island (novel, released January 2015). His work has appeared on NBC's Today Show, CBS's The Early Show, CNN's American Morning and BET's Nightly News. Three of Steven's short stories were selected "101 Best" for Chicken Soup for the Soul series. When not spending time with his beautiful wife, Paula, or their four children, this Massachusetts author is promoting his works or writing. Visit: www.StevenManchester.com


Are you all ready for a romance book that you will be thinking about long after the last page?
You are sure to love David and Lindsey's love story.
Author Steven Manchester writes with so much heart and I love the perspective of a man when it comes to romance.
I gave this book 4 stars. I recommend it as well.
I was given a copy of this book by the author for my honest review.
Posted by Mary Jackson at 7:14 AM