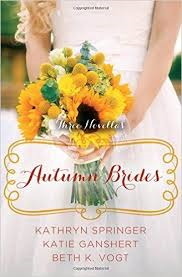 Happily ever after begins today. The honor of your presence is requested at three autumn weddings . . .
A September Bride by Kathryn Springer
When Annie moves to Red Leaf, she’s ready to call the little town home, but Deputy Jesse Kent can’t believe his mother has handed the keys to her bookshop over to a woman she met on the internet. Jesse has seen his mother taken advantage of before, and he decides to keep a close eye on this Annie Price. But when a close eye turns into a historical wedding reenactment with Jesse and Annie as the couple, make-believe nuptials quickly give way to real-life emotions.
An October Bride by Katie Ganshert
No one but Jake and Emma know the true reason they’re getting married—so Emma’s dying father can walk her down the aisle. While Jake and Emma plan an autumn wedding together, it becomes clear that their agreement has a few complications—the biggest being their true feelings for each other.
A November Bride by Beth K. Vogt
Having celebrated the big 3–0 by ending a relationship, Sadie is tired of romantic relationships-by-text. The only man she knows willing to put down his iPhone and have face-to-face conversations with her is Erik. It’s time to put a 21st-century twist on the Sadie Hawkins’ tradition of a woman going after her man. But when he realizes he’s fallen for her, can Erik convince Sadie his just-for-fun dates were the prelude to “’til death do us part.?

Kathryn Springer is a USA Today bestselling author. She grew up in northern Wisconsin, where her parents published a weekly newspaper. As a child she spent many hours sitting at her mother’s typewriter, plunking out stories, and credits her parents for instilling in her a love of books―which eventually turned into a desire to tell stories of her own. Kathryn has written 19 books with close to two million copies sold. She lives with her husband and three children in Marinette, Wisconsin.Katie Ganshert graduated from the University of Wisconsin in Madison with a degree in education, and worked as a fifth grade teacher for several years before staying home to write full-time. She was born and raised in the Midwest, where she lives with her husband, their young son, and their goofy black lab, Bubba. When she’s not busy writing or playing or reading or snuggling, she is obsessing over the paperwork and the waiting that comes with adoption.Beth K. Vogt believes God's best is often behind the doors marked "Never." She's the wife of a former Air Force family physician who said she'd never marry a doctor-or anyone in the military. She's a mom of four who said she'd never have kids. She's a former nonfiction writer and editor who said she'd never write fiction. Beth's novels include Wish You Were Here, Catch a Falling Star, and Somebody Like You. --This text refers to the MP3 CD edition.

I must say I dislike novellas not a little bit, a whole lot, because great authors should not be aloud to write a little I love words so I feel they should be able to use as many as they want. Way to short is not always good.
I loved all three of these way to short stories. If I had to pick a favorite I would be in big trouble they were all so good and they were fun feel good reads. Just what we all want to read on a hot summer day.
The characters were so easy to like you felt like they were close friends and family in all three stories.
I have to say all three endings were great you will not be disappointed.
Out of all of the Year of Weddings Novella Collection I have read this has been my favorite by far.
This is for sure a 5 star two times book, You will not be able to put it down. I recommend it for everyone who love a feel good read.
I was given a copy of this book by the publisher for my honest review.
Posted by Mary Jackson at 9:23 AM