Home All Along By Beth Wiseman 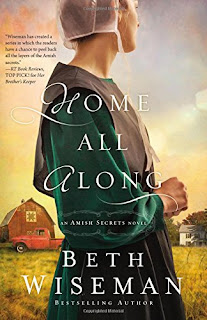 Charlotte has made a home for herself in Amish Country with Daniel. But unforeseen events rock their fragile world and may move them even further away from the life they long for.
Charlotte, an Englisher, is living in Amish Country, and she has formed strong and lasting bonds with the people in her new community. She has even fallen in love with an Amish man. But just when she is considering a permanent conversion to the Amish way of life, her world crashes around her. An unexpected death and a mysterious visitor unsettle Charlotte, and she begins to question her faith and her choices.
Daniel loves Charlotte and wants to share his life with her, even it if means leaving the only world he’s ever known. But as he walks alongside of her through her struggles, his own world is turned upside down when a loved one receives a grim medical diagnosis and a prodigal relative returns home. Will Charlotte and Daniel’s relationship succumb to the many pressures around them, or will their faith and the strong community around them allow them to weather the storms of their own lives in order to build a life together? 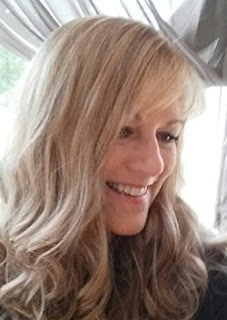 Beth Wiseman is the best-selling author of the Daughters of the Promise series and the Land of Canaan series. Having sold over 1.5 million books, her novels have held spots on the ECPA (Evangelical Christian Publishers Association) Bestseller List and the CBA (Christian Book Association) Bestseller List. She was the recipient of the prestigious Carol Award in 2011 and 2013. She is a three-time winner of the Inspirational Readers Choice Award, and an INSPY Award winner. In 2013 she took home the coveted Holt Medallion. Her first book in the Land of Canaan series—Seek Me With All Your Heart—was selected as the 2011 Women of Faith Book of the Year. Beth is contracted with HarperCollins Christian Publishing into the year 2018, and she has published thirteen novels and thirteen novellas to date.

As a former newspaper reporter, Beth was honored by her peers with eleven journalism awards, including first place news writing for The Texas Press Association. She has been a humor columnist for The 1960 Sun in Houston and published articles in various publications. However, writing novels is where her heart is. She left her job as a journalist in 2008 to write novels fulltime.

Beth has a deep affection for the Amish and their simpler way of life, and while she plans to continue writing Amish love stories, she is also branching out into other areas. Her first non-Amish, contemporary—Need You Now—released in April 2012 and landed on the CBA Bestseller List. She enjoyed writing the story based in a town near where she lives, and she chose another small Texas town for her next non-Amish contemporary—The House that Love Built—which is based in Smithville, the same quaint town where movies such as Hope Floats and Tree of Life were filmed. Beth continued to spread her wings when she released The Promise in October 2014. Inspired by actual events, The Promise follows Beth’s characters all the way to Pakistan. Beth was involved in the real-life rescue when her friend was held captive in Pakistan. Beth is currently working on book #2 in her new Amish Secrets series, tentatively titled Jacob’s Ladder. Book #1—Her Brother’s Keeper—recently released and was chosen as a Top Pick by RT Reviews Magazine.

Beth and her husband are empty nesters enjoying the country life in Texas with three dogs and a rooster. When she’s not writing, she loves to travel, paint, and enjoy time with friends and family. You can find Beth at Fans of Beth Wiseman on Facebook where she interacts with readers and on Twitter at https://twitter.com/bethwiseman.
My Thoughts...
This is Book three in the An Amish Secrets Novel Series.  This is a book that I would read all of them in order, so that you are not lost and you know the whole back story. It does wrap up the story nicely, so as to not leaving you hanging.
This book is your typical Amish fiction book. If you are a fan of Wiseman then you are going to enjoy reading this series.
I gave this book 4 stars. Fans of Wiseman give it a try.
The Mary Reader received this book from the publisher for review. A favorable review was not required and all views expressed are our own.
Posted by Mary Jackson at 6:20 AM