God's NOT Dead: A Light In Darkness Movie 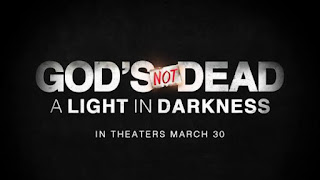 When his church burns down, a pastor (David A.R. White) and his estranged atheist brother (John Corbett) fight to get it rebuilt in the trailer for 'God's Not Dead: A Light in Darkness,' the third in the popular faith-based film series. Pure Flix

Filmed on location in Little Rock, Arkansas, the film stars actors David A.R. White as Pastor Dave; John Corbett ("My Big Fat Greek Wedding") who plays Pastor Dave's estranged brother, Pierce; and Jennifer Taylor, Pastor Dave's new love interest, Meg. Additionally, Ted McGinley (Thomas Ellsworth), Academy Award-winning actress Tatum O'Neal (Barbara Solomon) and Benjamin Onyango (Reverend Jude) are part of the cast.
Part one and two took place in a classroom and courtroom but the narrative will now turn inward, as the main character, Pastor Dave, takes viewers on a ride through his own personal conflict.
"God's Not Dead: A Light in Darkness" follows "Reverend Dave as he is released from prison to a flurry of controversy. The growing social unrest leads to Dave's church being burned down, a fire with tragic results."
"Devastated, Dave is launched on a painful spiritual journey as he fights against the university trying to keep him from rebuilding his church, and as his belief that 'God is good all the time' is put to the test. Along the way, Dave enlists the help of his estranged atheist brother who will support Dave in his legal fight, but also challenges him to recognize that sometimes fighting doesn't require defeating those we disagree with, but rather finding a way to heal, and to rebuild," says the film's synopsis.
Additional cast members include Emmy Award-winner Gregory Alan Williams, Mike C. Manning, Samantha Boscarino, rap artist Shwayze, Jennifer Cipolla, and music legend Dr. Cissy Houston. Reprising his role from the first "God's Not Dead" movie is Shane Harper ("Josh").

"Audiences have continued to show support and interest in the 'God's Not Dead' films and their relatable characters who endure similar challenges in their personal faith and lives," Michael Scott, Pure Flix founding partner said in the statement. "Our hope is that these films offer entertainment and encouragement, with a starting point for sharing faith in a respectable and compassionate manner."
The original "God's Not Dead" is the highest-grossing independent faith film of 2014, taking in more than $60 million at the box office and the creators are hoping to continue their success.
The film is being produced by Michael Scott, David A.R. White, Brittany Yost, Alysoun Wolfe and Liz Travis.