Nothing to Fear CD by Jennifer Shaw GIVEAWAY! 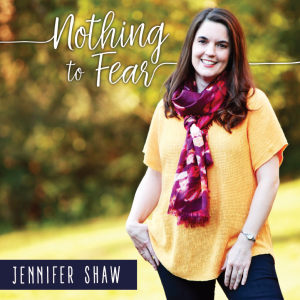 After a six year absence on the national radio charts, top 40 Billboard singer and Telly Award winning artist, Jennifer Shaw, has released a new full-length recording project entitled “Nothing to Fear”, produced by Lifeway’s Producer of the Year, Paul Marino. Though Shaw’s last album spawned a Telly Award-winning music video and songs used by organizations such as disability ministry Joni and Friends, as well as Remember Nhu, a worldwide organization that fights child sex slavery, Shaw waited until now to record songs that reflect the multiple changes in her life and family.
Beyond her musical success, Shaw is a sought-after speaker and author, and a long-time advocate for children. Shaw’s parenting skills were put to the test early on when her youngest child, son Toby, was diagnosed with a severe case of Sensory Processing Disorder. Shaw chronicled her family’s journey in the critically-acclaimed book “Life Not Typical: How Special Needs Parenting Changed my Faith and my Song”, which is now used in the Resource Library of Autism Speaks, the world’s leading autism science and advocacy organization. Shaw’s involvement with children’s organizations and her multi-year partnership with Compassion International took her to orphanages around the world where she learned that children over the age of 3 are rarely adopted, and their chances were even lower if they had medical issues. Armed with that knowledge, the Shaws realized they couldn’t help every child, but they could help somebody. So in the past 18 months, Shaw along with her husband and their three biological children have adopted three Chinese children with medical issues, ages 7 to 11.
The majority of the songs on the “Nothing to Fear” CD are about Shaw’s journey over the past two years. “My personality is a weird mix,” says Shaw. “I’ll jump right in and go to the other side of the world, but then I’ll be very fearful. I am writing a devotional right now on the topic of fear, and it is something we all struggle with at times. The chorus of the title song says ‘for You (God) are for me and there is nothing to fear.’ God never called us to play it safe. He wants us to do His will, and trust that He’s in control. This has been a pivotal lesson for me in the past few years.”
The song on “Nothing to Fear” that probably encapsulates the family’s passion for adoption is a tune Jennifer penned called “Forever Family.”
“The phrase ‘forever family’ is used in the adoption community. I could have easily written a song that made everyone cry, but instead, I decided to make this an uplifting tune that is a good reminder of what family is all about, and that every child deserves to have one.”
Looking back over the course of her life, Shaw now understands that the earlier struggles she endured — her near-death from a pregnancy, her father dying of ALS, and parenting a special needs biological child — all prepared her for this season of her family’s journey.
“All of those difficulties we went through taught me to totally rely on God, and that He really does use all things for our good,” says Shaw. “A lot of things I used to think were very important are no longer priorities. We are put on this planet for one purpose — to know Jesus and to make Him known. God’s faithfulness in the past is what gave me the courage to do something that initially made me very fearful — adopting older children from another culture who have medical issues. But taking God at his word and believing that there was nothing to fear have brought me the greatest joys of my life. I can’t imagine my life now without all six of my kids.” 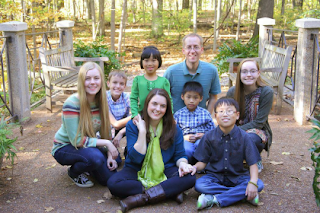 Jennifer Shaw is a Telly Award-winning singer and a 5-time top 40 Billboard artist. She was the first artist to take the song "Your Great Name" to the top of the National Inspirational charts in 2009. Her song "God Loved the World" was featured in a Lifeway Christmas musical and later used as an Easter choral anthem which became a #1 best-seller for Lifeway. Jennifer's song "Your Child," was made into a music video which garnered a prestigious Telly Award. The song has also been used by Joni Eareckson Tada’s organization, Joni and Friends, a worldwide organization which serves people with disabilities. In addition to recording and touring, Jennifer is a conference speaker who authored the book, “Life Not Typical: How Special Needs Parenting Changed my Faith and my Song.” The book was added to the Resource Library of Autism Speaks, the world's leading autism science and advocacy organization. Jennifer has shared the stage with many artists including Natalie Grant, Audio Adrenaline, and Big Daddy Weave, among others. The Shaw family lives in Columbus, Ohio. Visit http://www.JenniferShaw.com.


Listen to one of the songs here...
https://www.youtube.com/watch?v=hHiQzHfvZOE#action=share

Not just because Jennifer lives were I was born, Columbus Ohio. I have to say this is a great CD every single song is heartfelt and moving. I loved the whole CD. Like most CD's some songs more then others were my favorites. You can hear her story through the songs. I was moved by the song that she penned called Forever Family. I to would love to adopt a whole house full of kids in need of a Forever Family.
I HIGHLY recommend this moving CD.
The Mary Reader received this CD from the Adams PR Group for review. A favorable review was not required and all views expressed are our own.