One Last Chance by Jeffery Siger 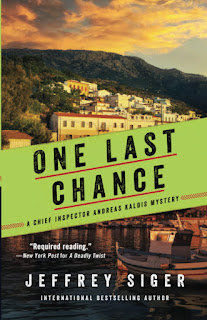 Welcome to the island where people never die

When Chief Inspector Andreas Kaldis's longtime assistant, Maggie, returns to her ancestral home on Ikaria for her 104-year-old grandmother's funeral, she quickly realizes not only was Yiayia likely murdered, but that a series of other long-lived Ikariots had recently died under the same suspicious circumstances. Back in Athens, Andreas and his chief detective Yianni pursue a smuggling and protection ring embedded in the Greek DEA, and its possible involvement in the assassination of an undercover cop.

But then Maggie and Yianni uncover a connection between their respective leads in the elder-killings on Ikaria and the DEA corruption case, and they realize that there are international intrigues far more dangerous at play than anyone had imagined.
Pick up your copy here...
Amazon.com: One Last Chance (Chief Inspector Andreas Kaldis Mysteries, 12): 9781728252957: Siger, Jeffrey: Books 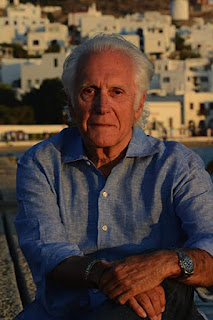 Jeff is an American living on the Aegean Greek island of Mykonos. The New York Times Book Review honored his work by designating Jeff as Greece’s thriller novelist of record, the Greek Government’s General Secretariat of Media and Communications selected him as one of six authors—and the only American—writing mysteries that serve as a guide to Greece, and Library Journal named his ninth book in the series, "An Aegean April," as one of the best books of 2018. He’s also received Barry and Left Coast Crime Best Novel award nominations. A consortium of producers have agreed to bring his series to the screen with filming to take place on location in Greece.

ONE LAST CHANCE, the latest in Jeff's Chief Inspector Andreas Kaldis series, is set on the mountainous, rugged Eastern Aegean island of Ikaria. Immersed in a storied past of exploitation, political exiles, and lives spent in hiding from conquerors, slavers, and pirates, today the island bears a worldwide reputation for its population living exceptionally long lives. It is the perfect setting for a mystery-thriller enmeshed in the consequences of bearing an international reputation for longevity during pandemic-panicked times.

Born and raised in Pittsburgh, Pennsylvania, Jeff practiced law at a major Wall Street law firm and while there served as Special Counsel to the citizens group responsible for reporting on New York City's prison conditions. He left Wall Street to establish his own New York City law firm and continued as one of its name partners until giving it all up to write full-time among the people, life, and politics of his beloved Mykonos, his adopted home of thirty-five years. When not in Greece, he enjoys his other home, a farm outside New York City. Jeff also has served as National Board Chair of Bouchercon World Mystery Convention and Adjunct Professor of English at Washington and Jefferson College teaching mystery writing.