Against the Twilight By Donald Parker Giveaway! 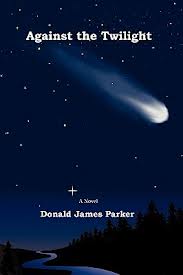 Heather has reached the pinnacle of the publishing world through weaving suspenseful plots in romantic novels featuring vampires. She's the toast of the town to most, but to David her fiction threatens to toast a whole generation of readers in the broiler of Hell. He writes his own book to enlighten the world about the dangers and evil of vampire glorification. He and Heather appear to be perfect candidates for a fierce war of words, but the ardor for battle is diminished by their mutual attraction. Despite their attempts to squelch the magnetic pull, their chemistry causes romance to bubble under the surface through all of the twists and turns of their adversarial relationship. While Heather's mother schemes to get the two together, an old gentleman at the nursing home attempts to set David up with Cindy, a nurse at the home. Cindy's beauty falls short of Heather's, but her spiritual beauty surpasses and grows as she places her love for David on the alter and focuses on worshipping God rather than one of His creatures. As David's life of service to God poses continual challenges, he struggles to deal with the romantic tug of war which threatens to paralyze him and unravel the tapestry of his ministry. As a man who communes with God on a daily basis, he receives the word from the Lord that he needs to trust that all will be well. He does trust when faced with a dangerous situation on the streets, but finds that allowing God to safeguard his heart proves to be a tougher assignment.
Pick up your copy here
http://www.amazon.com/Against-Twilight-Donald-James-Parker/dp/0982587015/ref=sr_1_1?ie=UTF8&qid=1354243767&sr=8-1&keywords=against+the+twilight

Don is a 1968 graduate of Madison Central High School in Madison, South Dakota. He graduated from Dakota State University in Madison in 1972 with a degree in secondary education. After moving to Washington State in 1981, Don studied computer programming and turned his writing efforts to software. After twenty-five years of IT work, Don's passion for writing flared up again, and the doctors couldn't do anything to cure it. The outcome is a five book series involving two generations of the Masterson family and four stand alone novels to date. The main focus of his work involves entertaining while educating through the struggle of his characters to find truth. Rather than avoiding controversial subjects Parker seeks out to shine a spotlight on issues of life which cause conflict.
I do NOT like vampire books, so an anti-vampire book was right up my alley. This is the second book by Donald that I have read and he is just a wonderful writer.
I really enjoyed this fun and easy read.
If you have not read any of Donald's books you really should pick up a copy and sit back and enjoy it.
I was given a copy of this book by the author
Posted by Mary Jackson at 8:18 PM