The Bones will Speak By Carrie Parks 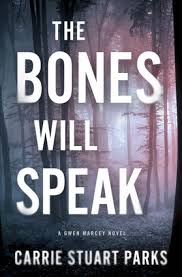 A killer with a penchant for torture has taken notice of forensic expert Gwen Marcey . . . and her daughter.
When Gwen Marcey’s dog comes home with a human skull and then leads her to a cabin in the woods near her Montana home, she realizes there’s a serial killer in her community. And when she finds a tortured young girl clinging to life on the cabin floor, she knows this killer is a lunatic.
Yet what unsettles Gwen most is that the victim looks uncannily like her daughter.
The search for the torturer leads back in time to a neo-Nazi bombing in Washington state—a bombing with only one connection to Montana: Gwen. The group has a race-not-grace model of salvation . . . and they’ve marked Gwen as a race traitor.
When it becomes clear that the killer has a score to settle, Gwen finds herself in a battle against time. She will have to use all of her forensic skills to find the killer before he can carry out his threat to destroy her—and the only family she has left. 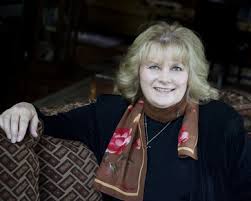 Carrie Stuart Parks and Rick Parks met in the romantic hallways of the FBI Academy in Quantico, Virginia. They married in nineteen eighty-nine and formed a dynamic and successful team in their fine and forensic art, working on major national and international cases and creating exquisite watercolors and stone carvings. They travel internationally, teaching forensic art to a variety of participants: from the Secret Service to the FBI, from large law enforcement agencies to the smallest two-man departments in their one-week classes. They welcome civilian artists to attend their courses as well. Carrie has won numerous awards for her innovative teaching methods and general career excellence and is a signature member of the Idaho Watercolor Society. Rick has received national recognition for his exquisite art placed on musical instruments.Carrie began her fiction writing career while battling breast cancer. Mentored by NY Times bestselling author, Frank Peretti, Carrie's debut novel garnered immediate interest by major publishing houses and landed her a three book deal at HarperCollins Christian.

Riveting to say the least. Are you ready for a new suspense author, Parks is one to watch out for.
I was on the edge of my seat, once I started reading I could not stop I had to know what was going to happen next.
Very engaging read. I love the forensic parts in this book and it all seems so real. It is just written such skill and truth. ( you can tell Parks has worked in Forensics in the past.)
This was the first book that I have read by Parks, oh but not my last. I ordered the first book in the Gwen Marcey Series to read as well.
This is a must read for fans of Frank Peretti and Patricia Cornwell.
I gave this book 4 stars, and I recommend it.
I was given a copy of this book by Wynn Wynn Media for my honest review.
Posted by Mary Jackson at 11:34 AM