The Last Year of the War By Susan Meissner 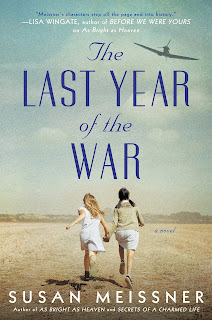 From the acclaimed author of Secrets of a Charmed Life and As Bright as Heaven comes a novel about a German American teenager whose life changes forever when her immigrant family is sent to an internment camp during World War II.

Elise Sontag is a typical Iowa fourteen-year-old in 1943—aware of the war but distanced from its reach. Then her father, a legal U.S. resident for nearly two decades, is suddenly arrested on suspicion of being a Nazi sympathizer. The family is sent to an internment camp in Texas, where, behind the armed guards and barbed wire, Elise feels stripped of everything beloved and familiar, including her own identity.

The only thing that makes the camp bearable is meeting fellow internee Mariko Inoue, a Japanese-American teen from Los Angeles, whose friendship empowers Elise to believe the life she knew before the war will again be hers. Together in the desert wilderness, Elise and Mariko hold tight the dream of being young American women with a future beyond the fences.

But when the Sontag family is exchanged for American prisoners behind enemy lines in Germany, Elise will face head-on the person the war desires to make of her. In that devastating crucible she must discover if she has the will to rise above prejudice and hatred and re-claim her own destiny, or disappear into the image others have cast upon her.

The Last Year of the War tells a little-known story of World War II with great resonance for our own times and challenges the very notion of who we are when who we’ve always been is called into question.

I cannot remember a time when I wasn't driven to write. I attribute this passion to a creative God and to parents who love books and more particularly to a dad who majored in English and passed on a passion for writing.

I was born in 1961 in San Diego, California, and am the second of three daughters. I spent my very average childhood in just two houses. I attended Point Loma College in San Diego, majoring in education, but I would have been smarter to major in English with a concentration in writing. The advice I give now to anyone wondering what to major in is follow your heart and choose a vocation you are already in love with.

I'm happy and humbled to say that I've had 17 books published in the last dozen years, including The Shape of Mercy, which was named one of the 100 Best Books in 2008 by Publishers Weekly, and the ECPA’s Fiction Book of the Year, a Carol Award winner, and a RITA finalist. I teach at writers' conferences from time to time and I've a background in community journalism.

I'm also a pastor’s wife and a mother of four young adults. When I'm not at work on a new novel, I write small group curriculum for my San Diego church. Visit me at my website: http//:susanmeissner.com on Twitter at @SusanMeissner or at www.facebook.com/susan.meissner

Are you ready for a history lesson like no other? I fell into this book and ate up every page of this friendship and the rich history. A historical drama you are not soon going to forget.
Elise begins her journey to find Mariko and we get a look into her life.
My hope is that everyone gets to read this work of art.
Elise's was taught that people are all the same, regardless of race, religion, or where they are born.
4 stars and I recommend it.
The Mary Reader received this book from the publisher for review. A favorable review was not required and all views expressed are our own.
Posted by Mary Jackson at 6:04 AM