Before and After By Lisa Wingate GIVEAWAY! 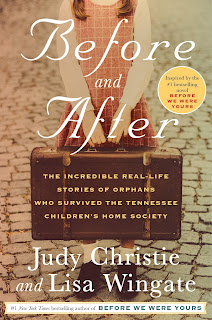 The compelling, poignant true stories of victims of a notorious adoption scandal—some of whom learned the truth from Lisa Wingate’s bestselling novel Before We Were Yours and were reunited with birth family members as a result of its wide reach
From the 1920s to 1950, Georgia Tann ran a black-market baby business at the Tennessee Children’s Home Society in Memphis. She offered up more than 5,000 orphans tailored to the wish lists of eager parents—hiding the fact that many weren’t orphans at all, but stolen sons and daughters of poor families, desperate single mothers, and women told in maternity wards that their babies had died.
The publication of Lisa Wingate’s novel Before We Were Yours brought new awareness of Tann’s lucrative career in child trafficking. Adoptees who knew little about their pasts gained insight into the startling facts behind their family histories. Encouraged by their contact with Wingate and award-winning journalist Judy Christie, who documented the stories of fifteen adoptees in this book, many determined Tann survivors set out to trace their roots and find their birth families.
Before and After includes moving and sometimes shocking accounts of the ways in which adoptees were separated from their first families. Often raised as only children, many have joyfully reunited with siblings in the final decades of their lives. Christie and Wingate tell of first meetings that are all the sweeter and more intense for time missed and of families from very different social backgrounds reaching out to embrace better-late-than-never brothers, sisters, and cousins. In a poignant culmination of art meeting life, many of the long-silent victims of the tragically corrupt system return to Memphis with the authors to reclaim their stories at a Tennessee Children’s Home Society reunion . . . with extraordinary results. 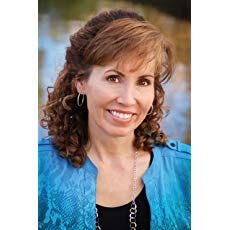 Selected among BOOKLIST'S Top 10 for two years running, Lisa Wingate writes novels that Publisher's Weekly calls "Masterful" and ForeWord Magazine refers to as "Filled with lyrical prose, hope, and healing." Lisa is a journalist, an inspirational speaker, and the author of a host of literary works. Her novels have garnered or been short-listed for many awards, including the Pat Conroy Southern Book Prize, the Oklahoma Book Award, the Utah Library Award, the LORIES Best Fiction Award, The Carol Award, the Christy Award, Family Fiction's Top 10, RT Booklover's Reviewer's Choice Award, and others. The group Americans for More Civility, a kindness watchdog organization, selected Lisa along with six others for the National Civies Award, which celebrates public figures who promote greater kindness and civility in American life. She's been a writer since Mrs. Krackhardt's first-grade class and still believes that stories have the power to change the world.
IN THE WRITER'S OWN WORDS: A special first grade teacher, Mrs. Krackhardt, made a writer out of me. That may sound unlikely, but it's true. It's possible to find a calling when you're still in pigtails and Mary Jane shoes, and to know it's your calling. I was halfway through the first grade when I landed in Mrs. Krackhardt's classroom. I was fairly convinced there wasn't anything all that special about me... and then, Mrs. Krackhardt stood over my desk and read a story I was writing. She said things like, "This is a great story! I wonder what happens next?"
It isn't every day a shy new kid gets that kind of attention. I rushed to finish the story, and when I wrote the last word, the teacher took the pages, straightened them on the desk, looked at me over the top, and said, "You are a wonderful writer!"
A dream was born. Over the years, other dreams bloomed and died tragic, untimely deaths. I planned to become an Olympic gymnast or win the National Finals Rodeo, but there was this matter of back flips on the balance beam and these parents who stubbornly refused to buy me a pony. Yet the writer dream remained. I always believed I could do it because... well... my first grade teacher told me so, and first grade teachers don't lie.
So, that is my story, and if you are a teacher, or know a teacher, or ever loved a special teacher, I salute you from afar and wish you days be filled with stories worth telling and stories worth reading.

My Thoughts...
Oh my where do I even start on this review.
First did you all read Wingates fiction book Before We Were Yours? If you answered NO you need to go get a copy of it and read it first.
Now on to  the real life stories of the babys from Tennessee childrens home and how they are doing now. Wingate interviewed them and they share their stories.
Wait until you read the chapter Seven- Dollar Baby. Wait until you get to the end of this book. Wingate has out done herself, this story telling getting to the heart of what  happened and making many aware of what happened. Many had to idea about this until Wingate wrote her frist book Before We Were Yours.
I HIGHLY recommend this 5 star book. I plan to share it with may people.
The Mary Reader received this book from the publisher for review. A favorable review was not required and all views expressed are our own.