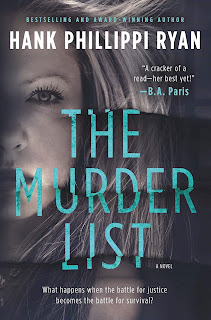 Law student Rachel North is the ultimate reliable narrator--she will tell you, without hesitation, what she knows to be true. She's smart, she's a hard worker, she does the right thing. She's successfully married to a faithful and devoted husband, a lion of Boston's defense bar. And her internship with the powerful District Attorney's office is her ticket to a successful future.
Problem is--she's wrong.

Rachel. Jack. Martha. Who is next on The Murder List?
And in this cat and mouse game--the battle for justice becomes a battle for survival. 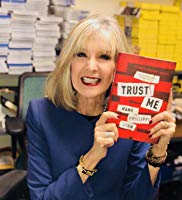 Hank Phillippi Ryan is the bestselling author of eleven award winning novels of suspense. National reviews have called her a "master at crafting suspenseful mysteries" and "a superb and gifted storyteller."
Her upcoming domestic suspense thriller THE MURDER LIST is a Most Anticipated Book of Summer 2019 from Criminal Element. AJ Finn calls it "a fireworks display of a novel--explosive, exciting and likely to leave you gasping." BA Paris says: "A cracker of a read!"
Her first psychological standalone, TRUST ME, is an *AGATHA AWARD* nominee. It was named a Best Book of 2018 from REAL SIMPLE Magazine, BookBub, PopSugar, Bustle, CrimeReads and The New York Post. Mary Kubica says: "Dazzling!" and Lisa Gardner says "Mesmerizing!" The Booklist STARRED review says "..it’s a knockout. First-rate psychological suspense."

Her thriller SAY NO MORE is a Library Journal BEST OF 2016. And a nominee for the AGATHA AWARD, the DAPHNE award, and the MARY HIGGINS CLARK AWARD! Associated Press calls it "stellar" and Publishers Weekly calls it "thrilling" "unflinching" and "gratifying."
Her 2015 book, WHAT YOU SEE, is a Library Journal BEST of 2015, an ANTHONY and AGATHA Award nominee, and a Top Pick!, dubbed "exceptional suspense." It received a starred review from Library Journal which says: "Readers will find themselves racing to the finish!"
Her 2014 book, TRUTH BE TOLD, won the AGATHA Award for best mystery, and is a Library Journal Best of 2014. It received starred reviews from Booklist and Library Journal, which says, "Drop everything and binge read!"
THE WRONG GIRL won the Agatha Award and the Daphne Award, and is a seven-week Boston Globe bestseller and Anthony Award nominee.
THE OTHER WOMAN won the coveted Mary Higgins Clark Award, and was listed as a Best Book of 2012 by the Kansas City Star, the Sacramento Bee, Suspense Magazine, and The Boston Globe, won the prestigious Mary Higgins Clark Award, and was the only novel nominated for the Agatha, Anthony, Macavity, Shamus and Daphne awards for Best Novel of 2012.
Her first four mysteries, beginning with the Agatha Award-winning PRIME TIME, feature Charlotte McNally, a Boston television reporter. FACE TIME was a BookSense Notable Book, and AIR TIME and DRIVE TIME were both Anthony and Agatha Award nominees for best novel of 2009 and 2010. They are now available in all new editions.
Hank is also an award-winning investigative reporter at Boston's WHDH-TV. In addition to 36 EMMYs and 14 Edward R. Murrow awards, Hank's won dozens of other honors for her ground-breaking journalism.
Her work has resulted in new laws, people sent to prison, homes removed from foreclosure, and millions of dollars in refunds and restitution for victims and consumers. She's been a radio reporter, a legislative aide in the United States Senate and an editorial assistant at Rolling Stone Magazine, working with Hunter S. Thompson, Richard Avedon and Richard Goodwin.
Hank is a founding teacher at Mystery Writers of America University and served as 2013 president of national Sisters in Crime. She blogs at Jungle Red Writers and Career Authors.
Learn more about Hank at www.HankPhillippiRyan.com.

My Thoughts...
I devoured this book, I could not get enough of the twists. I never saw the ending coming. Ryan is an author that knows her stuff the attorney aspect of this  book was wonderful.  Mind blown Ryan is at the top of her game with this one.
4 stars and I recommend this book.
The Mary Reader received this book from the publisher for review. A favorable review was not required and all views expressed are our own.
Posted by Mary Jackson at 6:04 AM