The Long Call By Ann Cleeves 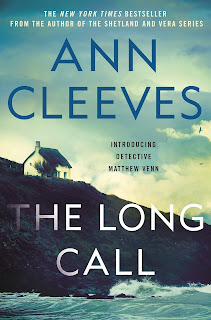 A PEOPLE MAGAZINE BEST BOOK OF FALL 2019
In North Devon, where two rivers converge and run into the sea, Detective Matthew Venn stands outside the church as his estranged father’s funeral takes place. On the day Matthew left the strict evangelical community he grew up in, he lost his family too.
Now, as he turns and walks away again, he receives a call from one of his team. A body has been found on the beach nearby: a man with a tattoo of an albatross on his neck, stabbed to death.
The case calls Matthew back to the people and places of his past, as deadly secrets hidden at their hearts are revealed, and his new life is forced into a collision course with the world he thought he’d left behind.
From Ann Cleeves, bestselling author of Vera and Shetland, beloved by readers and TV viewers alike, comes a spectacular new series, told with deep compassion and searing insight. 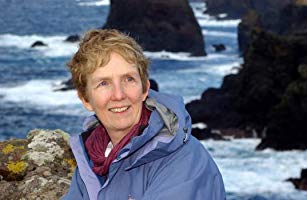 Ann is the author of the books behind ITV's VERA, now in it's third series, and the BBC's SHETLAND, which will be aired in December 2012. Ann's DI Vera Stanhope series of books is set in Northumberland and features the well loved detective along with her partner Joe Ashworth. Ann's Shetland series bring us DI Jimmy Perez, investigating in the mysterious, dark, and beautiful Shetland Islands...
Ann grew up in the country, first in Herefordshire, then in North Devon. Her father was a village school teacher. After dropping out of university she took a number of temporary jobs - child care officer, women's refuge leader, bird observatory cook, auxiliary coastguard - before going back to college and training to be a probation officer.
While she was cooking in the Bird Observatory on Fair Isle, she met her husband Tim, a visiting ornithologist. She was attracted less by the ornithology than the bottle of malt whisky she saw in his rucksack when she showed him his room. Soon after they married, Tim was appointed as warden of Hilbre, a tiny tidal island nature reserve in the Dee Estuary. They were the only residents, there was no mains electricity or water and access to the mainland was at low tide across the shore. If a person's not heavily into birds - and Ann isn't - there's not much to do on Hilbre and that was when she started writing. Her first series of crime novels features the elderly naturalist, George Palmer-Jones. A couple of these books are seriously dreadful.
In 1987 Tim, Ann and their two daughters moved to Northumberland and the north east provides the inspiration for many of her subsequent titles. The girls have both taken up with Geordie lads. In the autumn of 2006, Ann and Tim finally achieved their ambition of moving back to the North East.
For the National Year of Reading, Ann was made reader-in-residence for three library authorities. It came as a revelation that it was possible to get paid for talking to readers about books! She went on to set up reading groups in prisons as part of the Inside Books project, became Cheltenham Literature Festival's first reader-in-residence and still enjoys working with libraries.
Ann Cleeves on stage at the Duncan Lawrie Dagger awards ceremony
Ann's short film for Border TV, Catching Birds, won a Royal Television Society Award. She has twice been short listed for a CWA Dagger Award - once for her short story The Plater, and the following year for the Dagger in the Library award.
In 2006 Ann Cleeves was the first winner of the prestigious Duncan Lawrie Dagger Award of the Crime Writers' Association for Raven Black, the first volume of her Shetland Quartet. The Duncan Lawrie Dagger replaces the CWA's Gold Dagger award, and the winner receives £20,000, making it the world's largest award for crime fiction.
Ann's success was announced at the 2006 Dagger Awards ceremony at the Waldorf Hilton, in London's Aldwych, on Thursday 29 June 2006. She said: "I have never won anything before in my life, so it was a complete shock - but lovely of course.. The evening was relatively relaxing because I'd lost my voice and knew that even if the unexpected happened there was physically no way I could utter a word. So I wouldn't have to give a speech. My editor was deputed to do it!"

My Thoughts...
This is my first book by Cleeves and oh boy let me tell you, It will not be my last. I ate it up and could not turn the pages fast enough. The complicated family saga made for great reading. I also like that it is a fresh story and the Detective was one  for the books not your average detective. I can't wait for the next book in the series so I can gobble it up.  4 stars and I recommend this book.The Mary Reader received this book from the publisher for review. A favorable review was not required and all views expressed are our own.
Posted by Mary Jackson at 6:05 AM