An Inspirational Movie Based on Tragic Real Life Events

I have read both of Jackie Carpenter's books and was incredibly moved by them. I really hope people will run and pick up copies to read, then please go see the movie. Thanks for supporting her. Please take a moment and LIKE the movie page on facebook: 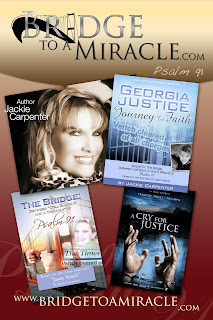 Jackie Carpenter never intended to become an author; and neither did she ever expect to be a resource for persons facing a crisis in life. But Jackie took the crisis in her life, and subsequent miracle, and wove it into a dramatic and heart-wrenching story – The Bridge: Between Cell Block A and a Miracle is Psalm 91; and the Reluctant Author followed up with still another book - Georgia Justice: Journey To Faith – a remarkable guide on how to build faith when overcome by doubt, depression and tragic events.  These two dynamic books are currently being produced into the Motion Picture – A Cry For Justice!  Jackie continues to work as Office Mgr. in her husband Larry’s Medical Imaging Company while juggling Radio and Television Interviews and continuing to follow God in His plan for her to develop a Movie geared toward building faith in children; The Mustard Seed Kids (also centered around Psalm 91)

Selections From The Bridge: Between Cell Block A and a Miracle is
Psalm 91 &  Georgia Justice “Journey To Faith” 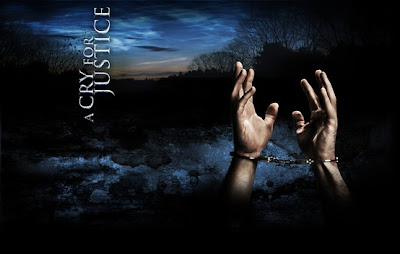 2nd Book Georgia Justice
Introduction
Am I dying?  I feel as if I am suffocating and choking on my own tears, in my own bed.  I must be having a nightmare!  But how can that be because I am not asleep?
As I tried to sit up I had such shortness of breath, my palms were sweating, and my fingers and toes were numb. I did not want to wake up Larry.  You see this is not the first time this has happened.  This has been going on now for several months. This has become normal for me.
I tried to climb out of the bed without making any noise.  I was able to get down to the floor and back onto my knees down beside my bed.  This was the place I had to get to in order to make the nightmare go away, and to be able to breathe normally again.  For you see this is where I knelt before the Lord and prayed for strength.  Strength that I always thought I had, but when tragedy struck, all strength was gone.
I was not praying for strength to get me through the tragedy, I was praying for strength to help me crawl from the bed into my Prayer Closet.  If I could just make it that far without dying, then I knew once I got there I would be safe from Satan.
I crept from the bedroom, thru the darkness where I soon saw the little “night light”” that helped guide me along the way into the Prayer Closet.  Once in there all I had the energy to say was “here I am again Lord”.   Plug me in to Life Support, and he would gently take me by the hand, and guide my eyes along his Word, until “peace came back”, my breathing slowed down, I refocused my thinking, and I was once again able to return to bed.