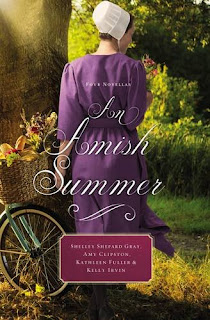 A Reunion in Pinecraft by Shelley Shepard Gray
When sisters Sharon and Sherilyn Kramer attend a wedding in Shipshewana, one of them returns with a new penpal while the other returns to her job at the bakery. After sending weekly letters back and forth, Sherry and Graham Holland arrange a reunion in Pinecraft. Upon Graham’s arrival, however, he realizes he’s been writing to the wrong sister. He decides to use the reunion as a way to get to know both sisters, but can he sort through the confusion in time to turn the worst vacation ever into something truly wonderful?
Summer Storms by Amy Clipston
Ariana is counting down the days until her wedding to Jesse. They have been friends longer than Arianna can remember, and that friendship turned into love over the past couple of years. But when Arianna’s brother Tobias, who happens to be Jesse’s best friend, gets them both into trouble, Arianna’s father puts an end to her engagement to Jesse. Some summer storms pass quickly, but Arianna is afraid the damage from this one may be too much to repair.
Lakeside Love by Kathleen Fuller
Esther has always lived in the shadow of her beautiful younger sister Sarah. Even the boy she has known—and loved—her entire life, Judah, only has eyes for Sarah. But when a handsome young Englischer comes to live with the family for a summer, everything begins to change.
One Sweet Kiss by Kelly Irvin
Everybody in little Bee County, Texas, can see the obvious: Jacob King and Martha Byler are meant to be together. Everyone, that is, but Martha. Ever since her mother died when Martha was a young girl, she has taken over the role of caregiver to her large family. And reckless Jacob, who has had a little too much fun on his rumspringa, only seems to add to the list of people to manage. But one summer changes everything, and these two may just find a way to meet in the middle and share one sweet kiss.

Kelly Irvin is the author of the Amish of Bee County series, which includes The Beekeeper’s Son, which received a starred review from Publisher’s Weekly, calling it “a delicately woven masterpiece.” She is also the author of the Bliss Creek Amish series and the New Hope Amish series. Kelly’s novella, A Christmas Visitor, appears in the anthology The Amish Christmas Gift. Her novella, Sweeter than Honey, is included in the anthology The Amish Market.
She wrote two romantic suspense novels, A Deadly Wilderness and No Child of Mine.
A former newspaper reporter and retired public relations professional, Kelly lives in Texas with her husband, photographer Tim Irvin. They have two children, two grandchildren, and two cats. In her spare time, she likes to read books by her favorite authors.

Shelley Shepard Gray is a New York Times and USA Today bestselling author, a finalist for the American Christian Fiction Writers prestigious Carol Award, and a two-time HOLT Medallion winner. She lives in southern Ohio, where she writes full-time, bakes too much, and can often be found walking her dachshunds on her town's bike trail.  Find Shelley on her website, www.shelleyshepardgray.com, on Facebook: ShelleyShepardGray, and on Twitter @ShelleySGray.

Amy Clipston is the award-winning and bestselling author of the Kauffman Amish Bakery series. Her novels have hit multiple bestseller lists including CBD, CBA, and ECPA. Amy holds a degree in communication from Virginia Wesleyan College and works full-time for the City of Charlotte, NC. Amy lives in North Carolina with her husband, two sons, and three spoiled rotten cats. Visit her online at amyclipston.com Facebook: AmyClipstonBooks Twitter: @AmyClipston
Kathleen Fuller is the author of several bestselling novels, including the Hearts of Middlefield novels, the Middlefield Family novels, and the Amish of Birch Creek series, as well as a middle-grade Amish series, the Mysteries of Middlefield. Visit her online at www.kathleenfuller.com, Twitter: @TheKatJam, and Facebook: Kathleen Fuller.

My Thoughts...
Four romances by four different Amish fiction authors. Shelly Shepard Gray can't write a bad book. The settings and the characters are very well written and who doesn't want to go to Pinecraft. Kelly Irvin writes like no other and you fall right into her books and you never want to let go. These short novellas are great for beach reads.  All four novellas teach a lesson.
I gave An Amish Summer 4 stars. If you are a fan of Kelly and Shelly and Amish books like I am you are going to want to read these short stories this summer.
The Mary Reader received this book from the publisher for review. A favorable review was not required and all views expressed are our own.
Posted by Mary Jackson at 9:27 AM