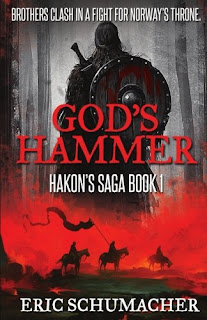 History and legend combine in the gripping tale of Hakon Haraldsson, a Christian boy who once fought for the High Seat of a Viking realm.

It is 935 A.D. and the North is in turmoil. King Harald Fairhair has died, leaving the High Seat of the realm to his murderous son, Erik Bloodaxe. To solidify his claim, Erik ruthlessly disposes of all claimants to his throne, save one: his youngest brother Hakon.

Erik's surviving enemies send a ship to Wessex, where the Christian King Athelstan is raising Hakon. Unable to avoid his fate, he returns to the Viking North to face his brother and claim his birthright, only to discover that victory will demand sacrifices beyond his wildest nightmares. 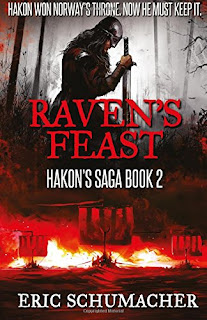 It is 935 A.D. and Hakon Haraldsson has just wrested the High Seat of the North from his ruthless brother, Erik Bloodaxe. Now, he must fight to keep it.

The land-hungry Danes are pressing from the south to test Hakon before he can solidify his rule. In the east, the Uplanders are making their own plans to seize the throne. It does not help that Hakon is committed to his dream of Christianizing his people - a dream his countrymen do not share and will fight to resist.

As his enemies move in and his realm begins to crumble, Hakon and his band of oath-sworn warriors must make a stand in Raven's Feast, the riveting sequel to God's Hammer. 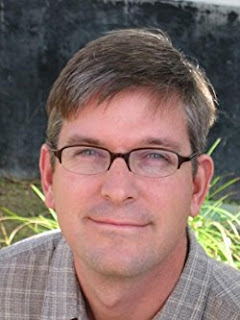 Eric Schumacher (1968 - ) is an American historical novelist who currently resides in Santa Barbara, California, with his wife and two children. He was born and raised in Los Angeles and attended college at the University of San Diego.

At a very early age, Schumacher discovered his love for writing and medieval European history, as well as authors like J.R.R. Tolkien and C.S. Lewis. Those discoveries continue to fuel his imagination and influence the stories he tells. His first novel, God's Hammer, was published in 2005.

Welcome Mr. Eric Schumacher,
What is the most important thing you hope readers will take away from reading your books?
There are a lot of things I’d love for people to take away from my books. Everything from more knowledge about Hakon and that time period, to a few hours of reading enjoyment. But if I had to boil it down to one thing, then I’d say knowledge of Hakon. While we don't know all of the facts about Hakon's life, we do know that even if marginally true, Hakon's story takes many of the norms of Viking literature and turns them on their head. This not only makes him a memorable hero, but one that instantly drew me to him as a character.
When Hakon returns from England to fight for the throne of Norway, he is a fourteen-year-old Christian. In other words, he’s unlike most, if not all, Viking heroes in the sagas. Here is essentially a boy fighting a man’s game, and doing so with one hand tied behind his back because he practices a faith few of his countrymen condone. Yet, Hakon clings to his faith, and it is a decision that plagues him. He is essentially fighting two battles: one against his physical enemies and one against his own desire to remain true to himself. His strength in holding firm to his beliefs is, in many ways, both the source of his power and his greatest weakness.
I hope my readers will see that struggle and recognize his story as something different from other Viking tales.

How does your faith play in your writing?
I would characterize my faith as both personal and rife with questions. I have an inquisitive mind by nature, so it was always difficult for me to accept religion without questions. Early in my life, I lost my brother tragically and that made me question faith even more. That said, I am fascinated by people’s religious beliefs and convictions, especially in the face of life’s trials; and I love investigating how faith can motivate our actions, for better or worse. Hakon is a perfect example of that ongoing investigation.

Why did you write a series?
The story of Hakon Haraldsson’s rise and rule spans over 30 years. It starts as a child and a teenager, and ends as a middle age man. To cover it all in one book, I felt like I would have had to omit some of the details that I think are important to Hakon’s life, such as his motivations and mindset, both of which I could see changing over time. I wanted to bring those changes out, and I didn’t feel one expansive novel would allow me to do that.

Why did you choose this genre?
I’ve always loved history. To me, history was never just about places and names and dates. It is about people and the motivations that drive them to do certain things. The story of those people is, in my mind, what makes history come to life. Historical fiction is the perfect vehicle for investigating those motivations and putting meat on the bones of people who might otherwise just be a line on the page of some history book or historical manuscript.

What was the problem that was your greatest roadblock and how did you overcome it?
My greatest roadblock to telling Hakon’s story (and frankly, my greatest roadblock to writing in general) was life itself. I always loved to write but never considered it a career. As a result, I pursued a career in business. Halfway through my Masters program in business I realized that I wanted to be a writer. The realization was both stunning and frustrating. Stunning because it never dawned on me before. Frustrating because the timing couldn’t have been worse. I had just gotten married, had taken on student loans, and was in the middle of a two-year program. I felt I needed to pursue a business career to make ends meet. So, I wrote when I could fit it in, which was only a few hours a week. Inch by frustrating inch the book came together. Between the research and the writing, God’s Hammer and Raven’s Feast took me years to write. I’m hopeful that the third book in Hakon’s Saga will not take as long.


What is the quirkiest thing you ever done?
I’ve done a lot of stupid things in my life, but I wouldn’t call them quirky. I suppose being an avid Dungeon & Dragons (it’s a board game) player when I was young could be considered quirky by some. I was the Dungeon Master, the person who came up with the adventures, dungeons and worlds in which the other players played. I would spend hours and hours developing these adventures with their storylines and monsters. Looking back on it, I’m thankful I did, as I’m sure it contributing significantly to my writing.

How do you choose your characters names?
Many of the characters in my book are mentioned in the sagas, so there was no choice in their names. For those characters, it was more about choosing the spelling. For example, Hakon is spelled as Haakon, Håkon, Hakan, Hakon and so forth in the sagas. I tried to pick the version of the name that would be easiest to pronounce phonetically and that would not trip up readers with their spelling.

Those characters not mentioned in the sagas I gave names that I thought fit the characters. For instance, I chose Udd for a boorish man. I just thought the name fit.

If you could go anywhere in the world where would it be and why?

Being a Viking fan, I’ve visited many of the Viking sites in Western Europe. What I haven’t done yet and would love to do is to follow the Viking trading routes east from Scandinavia and down through Russia to Istanbul. That would be amazing!

Tell us about your family?
I have two awesome kids -- a boy who’s twelve and a girl who’s nine -- and a beautiful wife, who I’ve been married to for 23 years and who has been nothing but supportive of my writing. We also have a two-year-old dog named Peanut, and a fish whose name keeps changing (I finally gave up trying to remember it!)

Who is your favorite author?
Unfortunately, I don’t have just one. There are several I love for their subject matter and their style. Those are (in no particular order): Tolkien, Bernard Cornwell, Giles Kristian, Frans Bengtsson, Wilbur Smith, and Jack Whyte. I’m sure there are others that I’ll remember later, but off the top of my head, those are the authors that come to mind.

Tell readers how to keep up with you?
Reader can find me in a number of places. Here are the main spots:
Website: ericschumacher.net

I look forward to connecting!