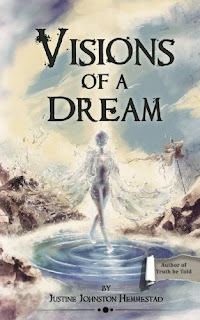 Visions of a Dream focuses on the spiritual fire that ignites Alexander the Great's actions as he learns from the other cultures he comes into contact with. His closest relationships vie for his love but they also provide the steel he needs to be sharpened spiritually and emotionally, for before he conquers the world he must first conquer his own mind. He is inclusive of all people, all cultures, and all religions and he lives that belief. Alexander's relationships with his fellow man knows no restrictions, nor does his love of the sublime. 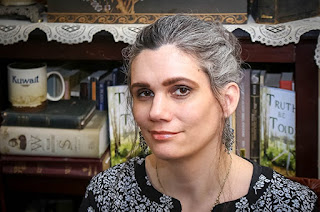 Justine Johnston Hemmestad's novel, Visions of a Dream, is a story about how the spiritual life of Alexander the Great intertwined with his military conquests and world vision. Hemmestad is also the author of Truth be Told, a novella that symbolically reveals the struggles in the mind of a brain injured person through a fictional story. For a wonderful Al Cole nod toward Visions of a Dream go to Justine's website: http://jhemmestad.wixsite.com/justine-j-hemmestad

I am a dog lover. Tell us about your pets if you have any. My daughters have a bunny named Marshmallow and we have one outside dog, a big mountain dog named Sparky, very lovable but he'll run around the neighborhood if we don't keep him at home. Also my son has a pet Cockatoo named Sebastian.
If you could go anywhere in the world where would you go? And why? I'm grateful to live in Iowa; I love the cornfields and the people, and I need the peacefulness. For small trips I'd love to visit some archaeological sites in the mid east and south America.
How do you keep your sanity in our run run world? Let things go. And if I have a lot I need to remember I'll make a schedule and prayer lists and journals and that helps (I can easily feel overwhelmed, otherwise).
Tell my blog readers one quirky thing about you. It's not really quirky but I had a severe brain injury in 1990 so I do quirky things because of it like forget things or get lost easy and I have little balance or coordination, and I have trouble seeing or finding someone in a crowd.
What sparked your decision to journey down the path of writing Visions Of A Dream? After a car accident in which I sustained my brain injury, I watched a documentary about Alexander the Great. I so admired his persistence and his ability to overcome in impossible situations - the things I needed myself to recover from my TBI - that I wanted to learn about him in depth (to the degree I could only reach by writing about him). I was stripped of everything personality-wise after my TBI, and as I began to implement aspects of Alexander's personality that I admired, such as his inclusiveness and desire to learn about people, cultures, histories, and religions of the world, I re-discovered myself in a way. He even sent scientific samples back to Aristotle in Greece, his former tutor,  throughout his march eastward, with a mind-set of constantly learning about the world. I think of his determination and resourcefulness in battle and his insatiable appetite to learn about people and cultures, rather than condemn them for not being Greek or Macedonian, in my own quest to earn a Master's Degree in Literature.
Why did you choose this genre? I love the research (which helped me organize my mind and discipline my thoughts) and I love to study the great people of the past to understand what made them great; I love to learn about what the ancients thought about things and why, and how different their perceptions were from today. The more research I did on Alexander, the more aspects of his persona I admired and the more I understood about the time in which he lived because he was in fact a product of that time. Writing about ancient history also took me out of my own struggle in a way while broadening my mind and its ability to adapt to its own injury.
Tell my readers how they can keep up with you. My website is http://jhemmestad.wixsite.com/justine-j-hemmestad and my Amazon page is at: https://www.amazon.com/Justine-Johnston-Hemmestad/e/B01DHSLN0M?ref_=pe_1724030_132998060 and my author facebook page is at: https://www.facebook.com/JustineJohnstonHemmestadauthor/
Posted by Mary Jackson at 6:20 AM