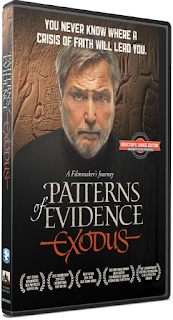 A debate rages over the credibility of the Bible. Most archaeologists today have concluded that there’s no evidence that the Exodus of Israelite slaves from Egypt ever happened. Filmmaker Timothy Mahoney faces a crisis of faith, “Is this foundational event of the Bible really just a myth?” He embarks on a 12-year journey around the world to search for answers.
Patterns of Evidence: The Exodus unlocks the mystery of this ancient saga, combining a scientific investigation with a retelling of the Exodus story to reveal an amazing pattern of evidence matching the biblical account that may challenge our understanding of history. Featuring stunning animations and a cast including Narrator, Kevin Sorbo (God’s Not Dead, Hercules: The Legendary Journeys), interviews with leading archaeologists including Israel Finkelstein, Kent Weeks, and David Rohl, and guest appearances by Israel’s Benjamin Netanyahu and Shimon Peres.
The Director’s Choice Edition has many behind the scenes clips whereas the retail version does not.

Special Features:
Details:
NOTE: Windows Media Player with OS7 and up is not to be used as a playback for any DVDs. Errors occur even if the DVD is 'All Region'. All taxes/duties/customs are buyers responsibility. All Sales Final.

This is a very interesting documentary. Archaeologists over the years have claimed that there is no evidence for the Biblical events of the book of Exodus. The maker of this documentary takes all the evidence found and puts them on chronological order. He proves that there is evidence of the Biblical events. He does have people from both sides that state their claims. I was cautious when I first started watching it. I have been caught by some documentaries that claim to prove the Bible but they are trying to do the exact opposite so I was reserved when I first started watching it.
You do have to have an appreciation of history and how it lines up with the Holy Scripture. I was very surprised by this. I enjoyed listening and learning how the Bible aligns with other historical documents and findings. The most interesting thing that I found was that there is an Egyptian tomb made for Joseph. I enjoyed watching and learning with this documentary and I hope you do also.
I gave this film 4 stars. It's worth the watch.


DVD GIVEAWAY!
Many thanks to Propeller Consulting, LLC for providing this prize for the giveaway.  Choice of winners and opinions are 100% my own and NOT influenced by monetary compensation.  I did receive a DVD in exchange for this review and post. Only one entrant per mailing address, per giveaway. GIVEAWAY is open to US entrants only.
Posted by Mary Jackson at 6:20 AM