Bark of Night By David Rosenfelt 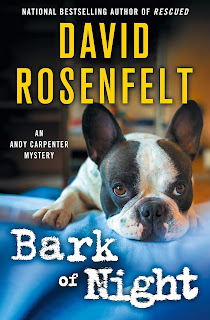 When defense lawyer Andy Carpenter’s veterinarian asks to speak to him privately at the checkup of his golden retriever, Tara, the last thing Andy expects is Truman. Tiny, healthy, French bulldog Truman was dropped off days ago with instructions to be euthanized by a man everyone thought was his owner. But now the owner is nowhere to be found.
Andy is furious. Who would want to euthanize a perfectly healthy dog with no explanation? He is willing to whisk Truman away to the Tara Foundation, the dog-rescue organization which is Andy’s true passion. They will find a home for Truman. But that’s not all the vet tells Andy. Thanks to Truman’s chip, it’s discovered that the man wasn’t Truman’s owner at all . . . Truman's real owner has been murdered.
It’s now up to Andy – with help from his loyal sidekick Tara, Truman and the rest of the gang – to solve this case. In the latest in the popular Andy Carpenter mystery series, David Rosenfelt’s charmingly clever wit and love of dogs are back and better than ever.

David Rosenfelt, a native of Paterson, New Jersey, is a graduate of NYU. He was the former marketing president for Tri-Star Pictures before becoming a writer of novels and screenplays. "Open And Shut" was his first novel; "First Degree," his second novel, was named a best book of 2003 by Publishers Weekly. He currently lives inSouthern California with his wife and 35 dogs.

My Thoughts...
This is not my first Rosenfelt book there are 19 others in the series and I suspect there will be many more.
They are stand alone you do not need to read them all or in order he writes them so that you can pick them up and enjoy them without reading them all.
I love the covers of his books. I love that he is a dog lover like me. Hello he owns 35 dogs.
These books suck you in and the mystery is so well thought out and executed.
Andy Carpenter and wonderful sidekick Tara a golden retriever with a French bulldog added to the mix who would not want to read this story?
I gave this book 4 stars and recommend it.
The Mary Reader received this book from the publisher for review. A favorable review was not required and all views expressed are our own.
Posted by Mary Jackson at 6:05 AM