Dachshund Through The Snow By David Rosenfelt 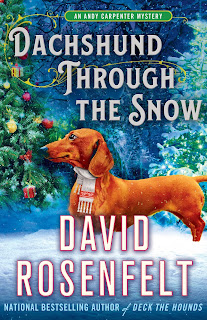 This Christmas, lawyer Andy Carpenter and his golden retriever, Tara, can't say no to helping young Danny and his dachshund, Murphy.
Lawyer Andy Carpenter and his wife, Laurie, have started a new Christmas tradition. Their local pet store has a Christmas tree, where instead of ornaments there are wishes from those in need. One poignant wish leads Andy to a child named Danny, whose selfless plea strikes a chord. Danny asked Santa for a coat for his mother, a sweater for his dachshund, Murphy, and for the safe return of his missing father.
It turns out Danny’s father doesn't want to be found, he’s on the run after just being arrested for a murder that took place fourteen years ago – a murder that Danny’s mother swears he didn’t commit.
With his trademark humor and larger-than-life characters – including a police officer and his K-9 partner, Simon – Rosenfelt never fails to deliver as Andy and his eccentric crew dash to reunite a family in time for Christmas.

David Rosenfelt, a native of Paterson, New Jersey, is a graduate of NYU. He was the former marketing president for Tri-Star Pictures before becoming a writer of novels and screenplays. "Open And Shut" was his first novel; "First Degree," his second novel, was named a best book of 2003 by Publishers Weekly. He currently lives in Southern California with his wife and 35 dogs.

This is not my first Rosenfelt book. So I already know what to expect.
He never disappoints this dog lover, and now with a Christmas book and dogs, Hello You had me Dachshund.
This book was such a fun read Golden retriever and dachshunds make for a warm story to be read be all.
I loved getting back to Andy Carpenter after being away from him for a bit.
This is by far Rosenfelts best book to date.
I gave this book 5 stars and I recommend it. I can't wait for you all to read it.
The Mary Reader received this book from the publisher for review. A favorable review was not required and all views expressed are our own.
Posted by Mary Jackson at 6:13 AM