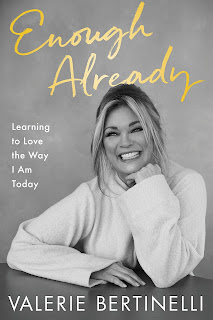 Behind the curtain of her happy on-screen persona, Valerie Bertinelli’s life has been no easy ride, especially when it comes to her own self-image and self-worth. She waged a war against herself for years, learning to equate her value to her appearance as a child star on One Day at a Time and punishing herself in order to fit into the unachievable Hollywood mold. She struggled to make her marriage to Eddie Van Halen — the true love of her life — work, despite all the rifts the rock-star lifestyle created between them. She then watched her son follow in his father’s footsteps, right up onto the stage of Van Halen concerts, and begin his own music career. And like so many women, she cared for her parents as their health declined and saw the roles of parent and child reverse. Through mourning the loss of her parents, discovering more about her family’s past, and realizing how short life really is when she and her son lost Eddie, Valerie finally said, “Enough already!” to a lifelong battle with the scale and found a new path forward to joy and connection. Despite hardships and the pressures of the media industry to be something she’s not, Valerie is, at last, accepting herself: she knows who she is, has discovered her self-worth, and has learned how to prioritize her health and happiness over her weight. With an intimate look into her insecurities, heartbreaks, losses, triumphs, and revelations, Enough Already is the story of Valerie’s sometimes humorous, sometimes raw, but always honest journey to love herself and find joy in the everyday, in family, and in the food and memories we share.
Pick up your copy here...                                                                                                                                    Enough Already: Learning to Love the Way I Am Today: Bertinelli, Valerie: 9780358567363: Amazon.com: Books 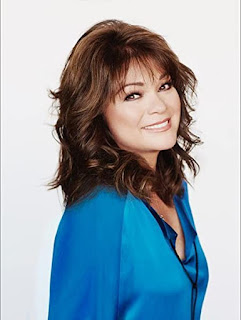 Valerie Bertinelli is the host of her own daytime series Valerie’s Home Cooking and co-hosts Kids Baking Championship on the Food Network. The two-time Golden Globe award-winning actress takes her fans into her kitchen with her new cookbook “Valerie’s Home Cooking” (Oxmoor House, an imprint of Time Inc. Books, October 2017). Her fun flavor combinations, like Brown Sugar Sriracha Bacon Bites, Lobster BLTs, and Tomato Soup with Grilled Cheese Croutons, transform traditional classics into crave-worthy and exciting new dishes to enjoy with friends and family. Bertinelli first became a household name for her role as Barbara on CBS’s long-running series, One Day at a Time. Over the years, her career expanded from acting to include hosting, spokesperson, business entrepreneur and New York Times best-selling author. She has also helped develop, produce, and star in several television movies and mini-series, and in August 2012 she received a star on the Hollywood Walk of Fame. She most recently starred as Melanie Moretti in TV Land’s critically acclaimed sitcom Hot in Cleveland.
My Thoughts...                                                                                                  Sitting down and reading Enough Already was like sitting at a table with Val and talking. Her real voice was so calming, and it was just like an afternoon with a friend. I loved how real she was and honest. This is a 5 star two times book. Ladies this is a must read.The Mary Reader received this book from the publisher for review. A favorable review was not required, and all views expressed are our own.
I have two extra copies for 2 lucky blog followers.
Posted by Mary Jackson at 4:55 AM