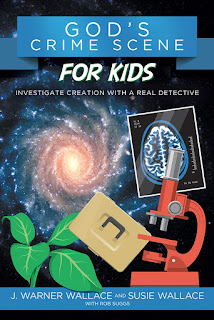 In this companion to Cold-Case Christianity for Kids, Jason uncovers a mystery in his grandmother’s attic. He and his friends, Hannah, Daniel and Jasmine, enlist the help of Detective Jeffries at the Jr. Detective’s Academy. Along the way, they develop the skills needed to investigate the mystery and the evidence of God’s existence. The cadets learn logical-thinking skills as they examine the contents of a mysterious box and the vast universe.

In God’s Crime Scene for Kids, real-life detective J. Warner Wallace shows kids ages 8 to 12 what skills are needed to solve Jason’s mystery, and at the same time looks at evidence in the universe that demonstrates God is the creator. Ultimately, kids will learn how to make their own case for God’s existence.

Warner Wallace is a Cold-Case Homicide Detective, Senior Fellow at the Colson Center for Christian Worldview, Adjunct Professor of Apologetics at Biola University, Christian Case Maker and author. J. Warner was a conscientious and vocal atheist through his undergraduate and graduate work in Design and Architecture (CSULB and UCLA); he always considered himself to be an "evidentialist". His experience in law enforcement only served to strengthen his conviction that truth is tied directly to evidence. But at the age of thirty-five, J. Warner took a serious and expansive look at the evidence for the Christian Worldview and determined that Christianity was demonstrably true. After becoming a Christ follower in 1996, Jim continued to take an evidential approach to truth as he examined the Christian worldview. He eventually earned a Master's Degree in Theological Studies from Golden Gate Baptist Theological Seminary.

J. Warner served as a Youth Pastor for several years, then planted a church in 2006. Along the way, he created and built the Cold-Case Christianity website, blog and podcast as a place to post and talk about what he discovered related to the evidence supporting Christianity. Jim has appeared on television and radio, explaining the role that evidence plays in the Christian definition of "faith" and defending the historicity of Jesus, the reliability of the Bible and the truth of the Christian worldview. Jim also speaks at churches, retreats and camps as he seeks to help people become confident Christian case makers.

J. Warner's professional investigative work has received national recognition; his cases have been featured repeatedly on NBC's Dateline, and he's been awarded the Police and Fire Medal of Valor "Sustained Superiority" Award. Relying on over two decades of investigative experience, J. Warner provides his readers with the tools they will need to investigate the claims of Christianity and make a convincing case for the truth of the Christian worldview.


This is a fun book packed with illustrations to draw 10 and 11 year olds in. Lots of fun reading for young ones.
Learning about God is sure to be a blast in this mystery.
I gave this book 4 stars and I hope you will invest in your kids reading is so much fun and learning while reading is the best.
The Mary Reader received this book from the publisher for review. A favorable review was not required and all views expressed are our own.
Posted by Mary Jackson at 8:57 AM

Email ThisBlogThis!Share to TwitterShare to FacebookShare to Pinterest
Labels: Juvenile